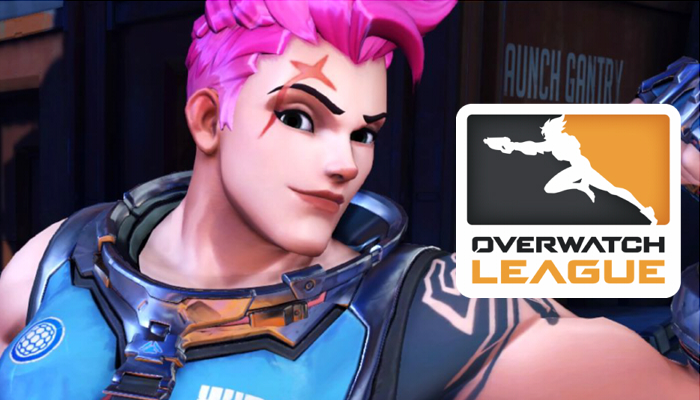 Is Zarya The NEW META In The Overwatch League?

Volamel 2022-05-12 07:41:52
Stop. Do not pass Go and don’t even think about cashing in those scrimbux. Forget most of what you knew about Zarya and her role in Overwatch for a moment. While you may think not much has changed with her, having an added bubble and one less tank sure begs to differ. And with how much we’ve seen her within Week 1 of the 2022 Overwatch League season, it’s time to begin to build a blueprint as to how we see this composition playing out and why it’s found such mixed success.  Zarya does still dictate a slower tempo composition, that much remains, but what your team is playing for in terms of win conditions and fight script changes completely. Gone are the days of playing for a Graviton Surge as your only win condition. This is not to say that Graviton Surge is a bad ultimate or that it isn’t a win condition. What we're saying is that it isn’t her team’s only win condition.  With two bubbles now Zarya comps are your go-to for an anti-Dive setup. With Ana being such a high priority target and picks like Winston and Doomfist being incredibly viable, Dive archetypes are the new standard and without much in the way of crowd control abilities to shut offensive flankers down, teams have looked towards Zarya as possible solutions to this. If we can’t ‘catch’ the dive with stuns, then what if we ‘protect’ against it with bubbles? That’s what Zarya does well, she takes the target of the table for the Dive and adds some impressive sustainability. However, that is just one function. As we all know by now, slow Overwatch is bad Overwatch. At some point you are going to have to be proactive, that’s where placing your bubbles onto something like a Reaper or Genji tends to shine.  Without mobility to take space or consistent damage mitigation through the use of a shield of some sort, this does mean positioning is incredibly important and oftentimes you’ll see Zarya only being picked on maps that allow for this deathball style to tuck away in houses and in tight corridors and remove the possibility of flanks almost entirely. Places like Eichenwalde, King’s Row, Oasis (University) and Lijiang Tower (Control Center) give Zarya great staging grounds to abuse the enclosed map geometry and limit how much her team can be split and picked apart. Now, instead of trying to find safe rotations to close the distance and create safe zones for engagement, there are some teams that will still attempt to just play Zarya to pocket her carries for big ultimate combos like Nano-Visor and Nano-Blade. However, that is not and has never been a strong macro strategy. If you spot a team that only finds success during those moments of high resource use, their neutral game is suspect.  That said, this is a composition with a high ceiling and a very low floor which may seem familiar to some of you. Many esports across the board have this dichotomy between what is ‘good’ and what is ‘easy’. Something that is both not easy and not good shouldn’t be played.  Something that is both easy to execute and considered good, tends to create rigid metagames where only one ‘strategy’ exists. Any fans of GOATs in the chat? Something considered not good but easy can take strat books by storm because of how coordinated or how the team has a strong understanding of the game script. Dallas Fuel’s Lucio/Moira Rush composition from last year is a great example.  Overwatch 2’s Zarya compositions seem to settle somewhere in the fourth option.  Something considered good but on the higher end of the difficulty scale creates this idea or ideal of a ‘perfect’ game where if the stars and moons all align then you create a sizeable advantage before the action kicks off. Ideally, Zarya creates some impressive windows for her team to punish the aggressive nature of the Dive archetype, however, precision is key. If her bubble is a touch too late, if your positioning is slightly off if you peek out one too many times, everything goes belly up and you look like the Toronto Defiant on Circuit Royal.  Speaking of presenting examples, here are a few different looks to wet your pallet.   The Dallas Fuel featured a prominent amount of Zarya, yet their showcase was a bit rougher around the edges.  On one hand, look how difficult it is for Houston to be proactive against the Fuel’s positioning here in the train car. Inversely look at how things get really hairy for Dallas as Hanbin is Rocket Punched off the high ground. With no ability to actually use his bubbles on his teammates, this makes the Fuel high susceptible to Houston’s Dive.  However, the onus here is on the Fuel to be proactive as the attacking team. Houston is perfectly fine letting them stand there doing nothing. They have no map control. They have no objective control. Dallas seems interested in this first fight just poking away and hoping Houston will be stupid enough to dive them. The Outlaws surround and contain them forcing some positional errors from Sp9rk1e.

Houston using their superior mobility to force cooldowns out of Dallas.

Even on the Fuel’s defensive half, the weakness of Zarya is shown. Dallas sets up on the high ground, assuming Houston will want to contest. Knowing how slow they are compositionally, the Outlaws just rotates under them and captures uncontested space close to the objective. Yes, Sp9rk1e has some heroics, but look at the second fight. Dallas has spread apart, leaving Hanbin to pray that he has a sightline to bubble the incoming Dive. Again when you are forced to rely on ultimates as your sole win condition or someone playing overly aggressive, things do not bode well for you.   Boston Uprising are the best team at the moment to touch Zarya and it isn’t close. In their match against the Los Angeles Gladiators, the Uprising put on a clinic on how best to maximize the Zarya look on Eichenwalde, however, it was paired with a Reaper. This allows the clump to play much more like a deathball and gives them a tool to be proactive with, punishing the enemy tank player as they engage. That concept of tank pressure echoes well throughout their attack as well. 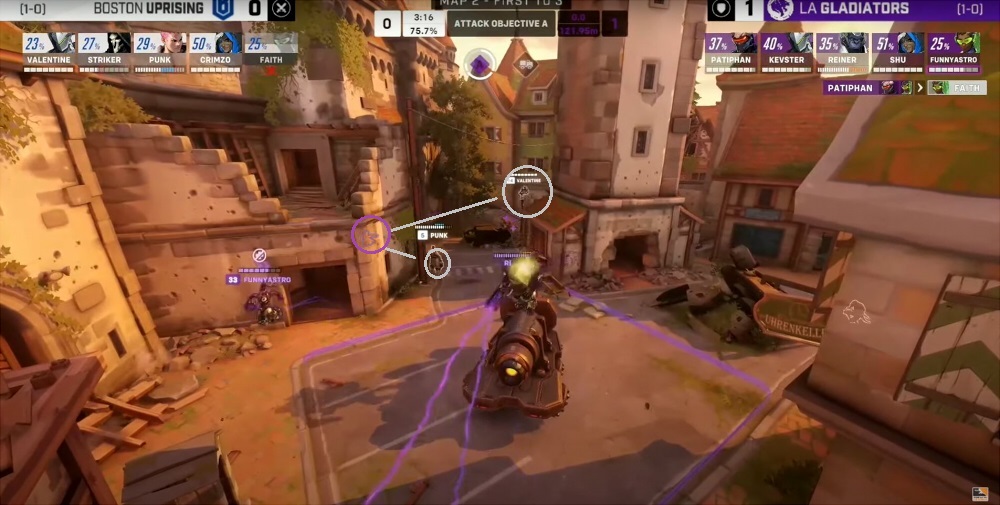 Even on the Uprising’s attack, you see an immediate change of pace when compared to their peers; a sense of proactivity. Boston’s capture of the enemy Lucio here shows a coordinated effort of aggression, and still it’s difficult to keep everyone alive with the Gladiators answering in mind with a kill on Valentine. The key to victory here was how measured they are in the mid-fight. Watch how Boston positions, always trying to regroup after picks and abusing the map geometry and how strong the Reaper pick is at containing the space the team creates.   One of the more creative looks hails from New York Excelsior as they bend the rules ever so slightly with Yaki’s Echo. If we understand that Zarya provides certain windows of protection, but lacks in mobility and makes it difficult to be proactive, what if we used her utility on a DPS pick that covers those flaws? Something that, through its own kit, can create picks on its own or can remove pivotal cooldowns from the enemy? Something like an Echo. Take this first fight on NYXL’s defence. New York has to haemorrhage a lot of space just inherently, which is something begrudgingly you have to do, but Kellan uses his bubbles to give Yaki an offensive window to dive-bomb either ANS or the Gladiators back-line. Throughout most of Circuit Royal, the NYXL found a surprising amount of success allowing Yaki to soak the majority of the team’s resources to create space. However, again on attack on Circuit Royal no less, the NYXL have a difficult time recontesting any space lost on their initial pushes. Look at how oppressive the Gladiators are here overlooking the lane. New York would love to get to the turn and play in that small corridor, but LA knows this and cuts their attempts at rotating towards the point at the knees. 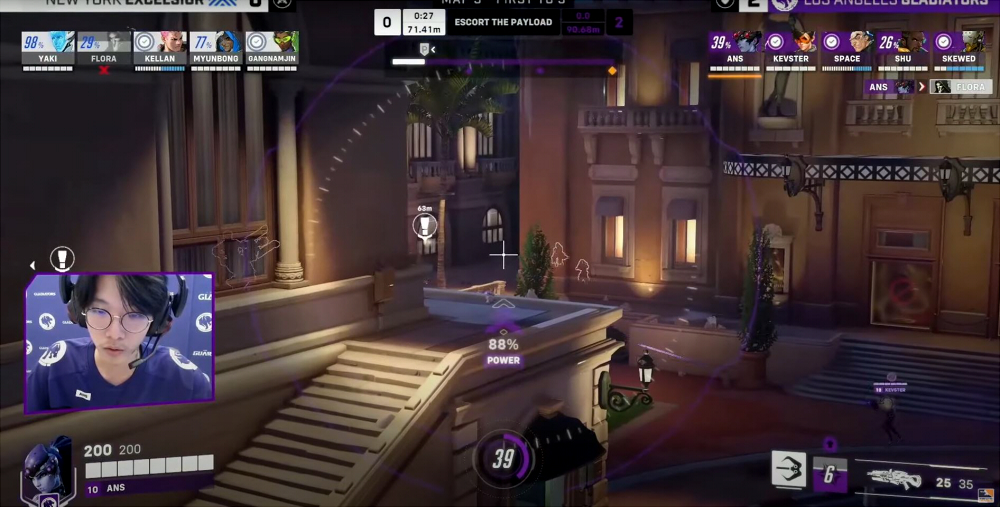 No, but really, what do you do here?

While it is difficult in practice, the theoretical upside is quite good. That said, we doubt the concept is going anywhere anytime soon but ideally, we see it cleaned up quite a bit.  First things first, teams cannot continue to run this on maps that make no sense. You want to abuse enclosed map geometry to keep your Zarya and supports safe, rather than giving the enemy open lanes of attack to punish you. Circuit Royal, Watchpoint: Gibraltar, Midtown, and even both of the Push maps offer too many options for Dive teams to surround and start to chip away at your cooldowns.  If Soldier: 76 and Tracer weren’t seeing as much playtime perhaps things might be different but there is too much consistent damage to just take on the chin. Losing a fight means you’ve lost the space you created which means it is that much harder to recontest.  Next, teams have to be very careful on which side they pick this on. We’ve been very vocal in the past; defending teams have to start planning for the vast majority of compositions because the attacking teams has swap priority on game modes like Escort and Hybrid. If you think a team like the Paris Eternal or Houston Outlaws isn’t going to scout your low ground close hold on Dorado and instantly swap to Pharah--you’re dead wrong.  And one of the most difficult hurdles more Zarya focused teams are going to have to face is how to properly be proactive. Again, slow Overwatch is bad Overwatch, so teams are going to need very clear rotations and calling if they want to thrive in the slower tempo game they’ve created for themselves. Punishing the enemy's Dive is one thing, but at some point you’re going to have to engage them and you cannot always bank on ultimates to do that for you.  That said, Zarya could be the catalyst for quite a few upsets as we venture into our first set of playoffs. While everyone is so focused on optimizing their Dive, the Zarya counter becomes that much more potent. With the composition laid out, hopefully, you can see teams' thought processes as we head deeper into the Kickoff Clash and the initial mixing pot that is Overwatch 2’s very first metagame adaptation.  Images via Blizzard Entertainment