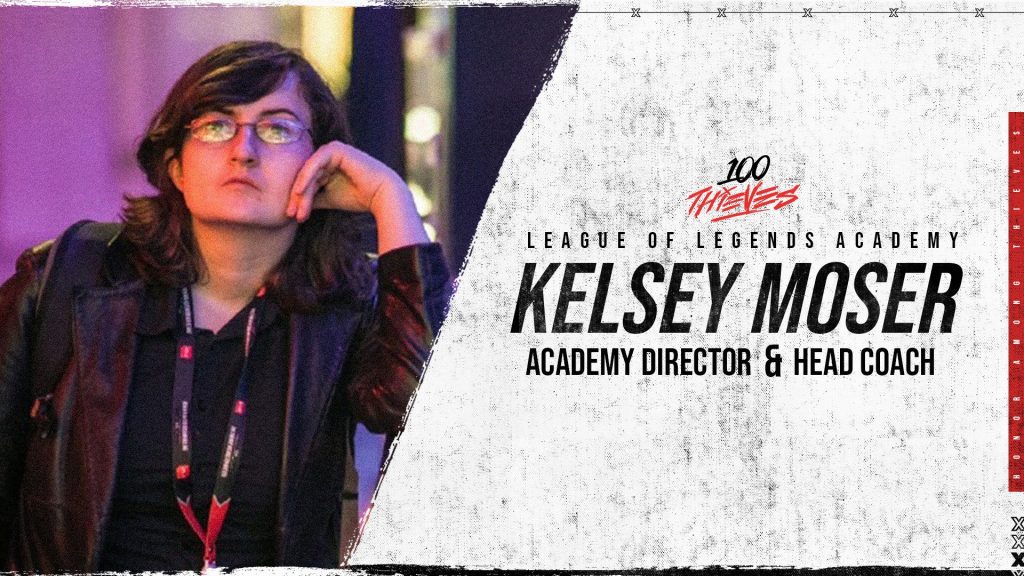 100T Academy Kelsey Moser: “There’s a large chasm between LCS and solo queue that isn’t really filled that well right now and it’s something that we can fix with the Academy system”

Izento 2019-01-02 05:04:31
100 Thieves Academy have recently signed a roster consisting of FakeGod, Fragas, Soligo, Prismal and Stunt. Along with the players, they have signed head coach Kelsey Moser to condition them to one day become LCS material. Previously, Moser was a content creator, mainly focused on the LPL region, but more recently has acted as analyst for H2K in the EU LCS, but the team unfortunately displayed a poor performances in Season 8. Now Kelsey comes to NA as a first time head coach and has the backing of 100 Thieves to create a cohesive roster and with that, she's looking to prove that her skill as an analyst can be transferred to the stage as a head coach. Esports Heaven was given the time of Kelsey Moser to ask about her former team H2K, scouting talent, and future plans for her content creation.

This is your first time being a head coach. How do you think it’ll differ from being an analyst?

I think one of the most important things a coach does is set the culture or the atmosphere of the team. I think that easily becomes the defining difference between the head coach and anyone else on the staff. That’s the biggest thing I want to focus on, to make sure I have a clear idea of the structure and everything I want to implement before I go in and then execute it.

What do you think went wrong with H2K? You guys had a really rough season.

In think part of it was that a lot of those players could do well on other teams, but the players together wasn’t the best fit and we didn’t have the most well-rounded opportunities to branch out and adapt to a wide variety of meta. There were just a few personality clashes and things like that which probably could have been worked on or anticipated a bit better, but having that experience allows me to better anticipate problems before they happen going forward. That’s something I’m trying to emphasize a little bit.

What things do you think you learned from Veteran being the head coach in H2K? What kinds of things can you instill from his techniques going over into your own team?

I think he has a good approach to how he likes to structure reviews. That’s one of my biggest takeaways from him and one of the things I’ll try to implement, in my own way of course.

I know you’re big on talent and server size, amateur talent pool. Everyone rags on NA for having little to no amateur talent, so what’s your belief on NA having talent? Do you find it’s rather difficult searching for talent in NA?

I think the general default assumption is that contracting an NA player is a risk. One of the primary reasons why NA talent search is behind other regions is because, obviously people immediately go to population size, but I think people use that as an excuse to not develop the amateur scene. For example, in Europe you have the very extensive national league system with separate sponsorships and separate competition feeding into EU Masters. It’s nearly impossible to sign a player in the LEC that would be considered a rookie and also have no team experience, whereas that’s less common in NA, so it’s more likely to see a player crash and burn in the NA LCS because he’s had zero team experience and he’s coming straight from solo queue. Or maybe he’ll have less team experience in general. The Academy in and of itself is a new thing that was implemented last year, whereas before the system in Challenger had become, ya know, we’re going to farm the qualification money and we’re not necessarily going to develop another generation of players. I think the reason why a lot of the perception that it’s harder to find good NA rookie players is because the work hasn’t been put in and the structure hasn’t been built to develop them. There’s a large chasm between LCS and solo queue that isn’t really filled that well right now and it’s something that we can fix with the Academy system.

Stunt was recently announced for your Academy roster. Some fans were surprised to see him not starting in the LCS. What do you think he offers to your team specifically?

Stunt is a smart player and he’s had a lot of different team environments and what to expect in multiple situations. If I ask him what champions he wants to focus on, he’ll have a list of qualifications and other things, so that’s very useful; outside of that, I think he’s a very good player in a lot of ways. People are surprised to not see him in the LCS and honestly, so am I, but I guess that’s good for me and my team.

Speaking about players moving up and down from LCS to Academy, what are your thoughts on players moving up or down, for whatever reason whether that’s attitude, gameplay, etc? Since you’re going to be on the other side of this scenario because you’re on Academy, do you think this will massively mess up your communication and synergy?

It is true that the team has a good mix of players that will have a good communication structure. Moving up or down players is something we’ll have to adapt to as these players are all working on having a specific role. Basically, the function of Academy is to train players for LCS and the role that they’ll have right now won’t be the same as when they get on an LCS team. When they’re exposed to a different dynamic and put into a position where they have to find ways to overcome and adapt, that takeaway will be useful for them and the entire team.

Sometimes the Academy team can be thought of as the guinea pig when it comes to testing a patch because they play before LCS. So will this be the dynamic between your Academy team and the LCS roster to get information? Or is it just both teams doing separate things to create the best strategy that you can for your specific team?

Well, we play two days before the LCS team, so they’ll already be practicing things themselves and we will be doing the same, so it’s not like they’ll tell us to play an Academy game before they can tell something is good or not; it’s not going to be something along those lines. It’s mostly going to be the public’s first taste of what’s probably coming out in the LCS, either from our team or a different Academy team, basically a first dip into what’s good on a new patch.

Talking to players while I was a content creator ended up being something that was rewarding for me because they would take some advice that I had and improve some small aspect of their gameplay. Coaching was always something I always had in the back of my mind as something that I would be interested in doing. There were various reasons in my personal life that prevented me from taking any offers that I had before, so it just kind of recently happened I suppose.

I will probably have more content in the off-season or breaks between splits. I enjoyed doing Worlds content and content is something I still enjoy doing, but my focus will primarily be on my team.

Is there anything you want to say heading into the new season?

I just want to reiterate that I have a lot of faith in the NA playerbase and I’ll have a large focus on making sure my players can reach the LCS because I absolutely do think they have that in their future. ___ Izento has been a writer for the LoL scene since Season 7, and has been playing the game since Season 1. Follow him on Twitter at @ggIzento for more League content. Image courtesy of 100 Thieves