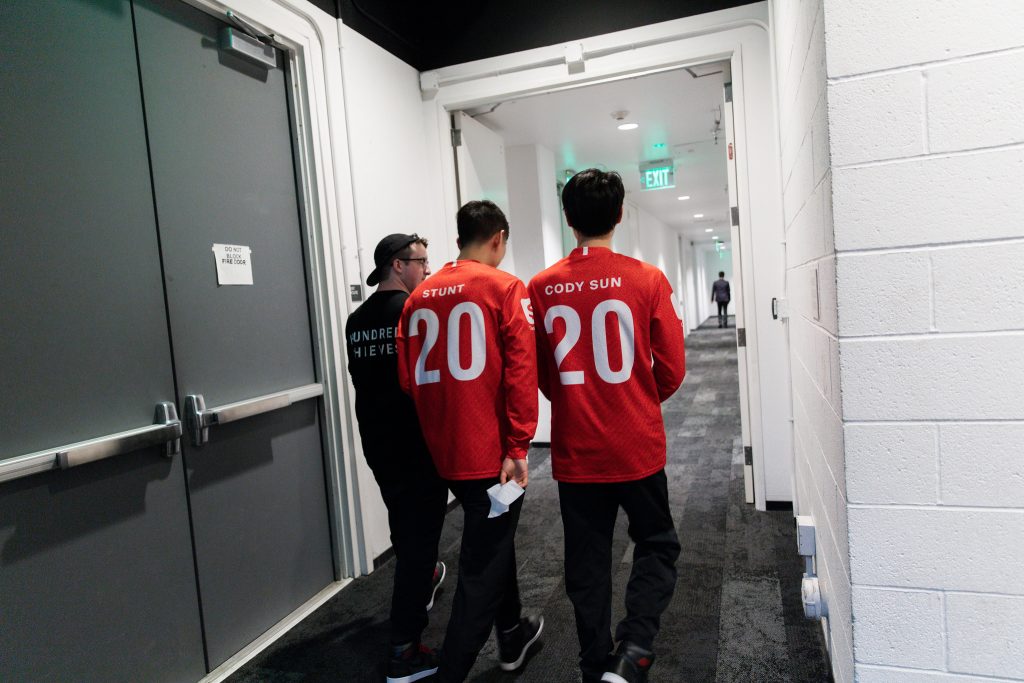 100T Stunt on being honest with Cody Sun: “It can get heated, we go back and forth a lot, but we can talk for hours and hours and at the very end we’ll come to an agreement like, this is what we’ll do from now on for bot lane[…] It just feels like we’re not hiding anything from each other”

Izento 2020-03-30 04:39:35
100 Thieves are looking better than ever, going 2-0 in Week 9 and solidifying themselves in contention for an upper bracket playoffs spot. With a big win over TSM on Saturday, and Stunt's great work front lining for the team, 100 Thieves look to press on to their tiebreaker matches. Esports Heaven touched bases with Stunt to talk about their game against TSM, Stopwatch, Stoneplate, and his relationship with Cody Sun.

This was a pretty close game. You guys got engaged right when Kobbe turned level 6. How do you believe your bot lane match-up went?

Varus, Tahm is definitely one of the strongest 2v2 lanes, and then we had to deal with the Jarvan pressure on the map, so we were trying to pull the lane more towards our tower. So I think we bled a decent amount of CS, but it was kind of necessary. In that match-up it's important to play for hp and to lose the minimum amount because Tahm and Varus are just extreme lane bullies. Another big thing was that we picked Nautilus for team composition and not just laning phase, being able to get out and have that frontline for later was kind of our intention.

You had a really dope play at dragon around 18 minutes where you popped your stopwatch after engaging as soon as Jarvan tried to go on you. How confident were you knowing that play was going to work out? 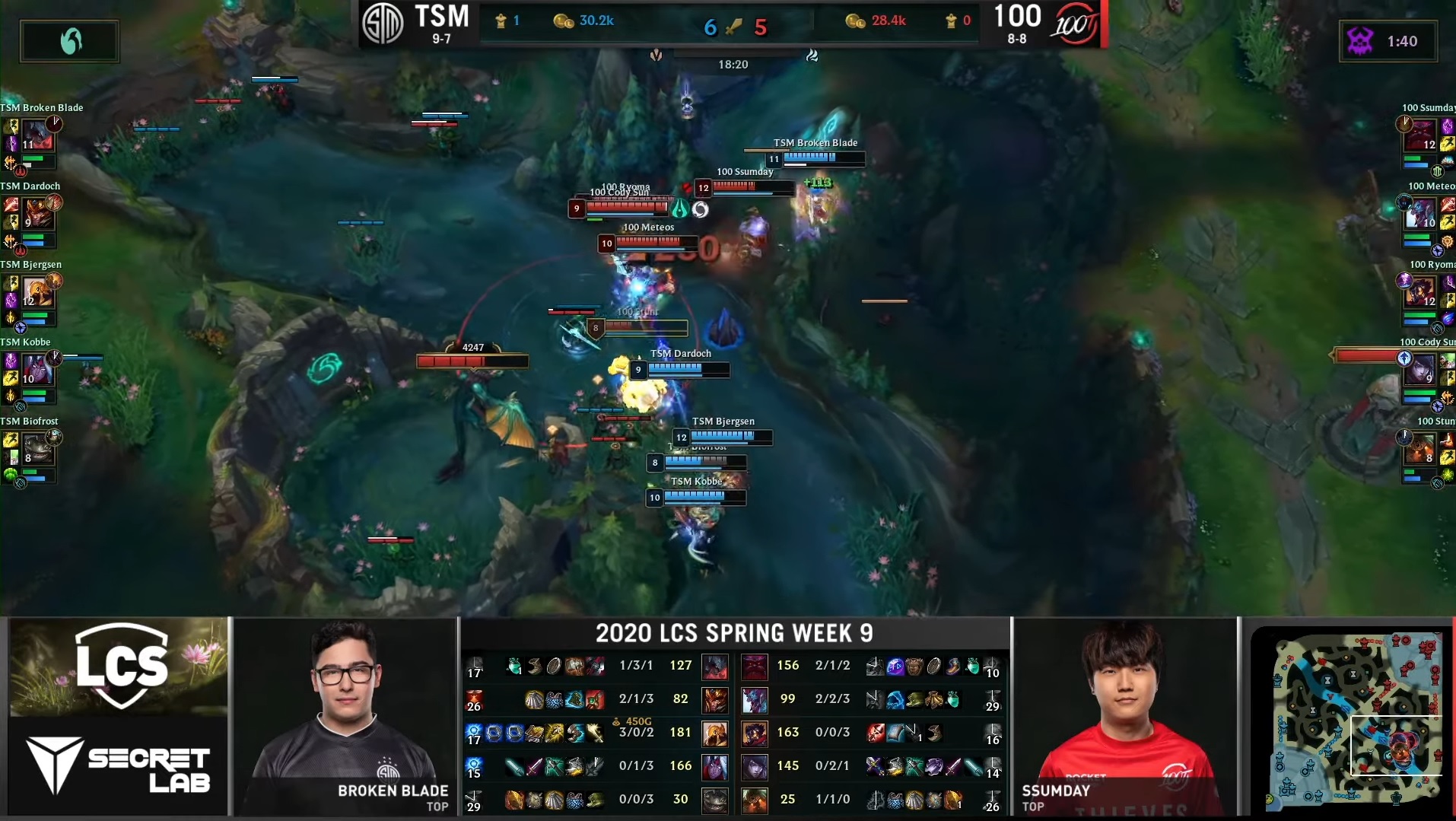 The two team comps this game, they had really strong back line DPSers. We had Viktor and Aphelios, they had Azir and Varus, and so whoever's front line can waste as much of the DPSer's time as possible is going to win the fight. So, my intention that fight was to go in, wait for their front liner to make a decision on if they wanted to go in too or if they wanted to go in on me instead. The moment they make that decision, I can ult their back line and stall as much time as possible and have my backline kills their front line and then afterwards I was calling that I could get out, I could just flash after the stopwatch, you don't need to save me. That was a really close fight for sure.

What I thought was interesting was that you had gone stopwatch through inspiration. As we know, stopwatch was recently nerfed only allowed to be used at 14 minutes if you don't get a kill or assist. Do you think the nerf was effective?

It was actually a buff for solo queue because a lot of the time you will get more than one or two kills by 14 minutes, so it will reduce sometimes below 10 minutes, but in competitive a lot of times you'll see 0-0 for a long time, so having a delayed stopwatch, especially for level 6 fights, like against Nautilus you wouldn't have it up at that time, and also against Varus you wouldn't be able to stopwatch once he turns 6. Those are the biggest differences, the level 6 fights.

To be honest, no. There's some melee supports that don't build Stoneplate like Braum, even Tahm Kench it's optional. People have been building it every game but I think it's situational. If you're going to be the middle of at least three people, soaking as much time as possible for your team to DPS, if that's the situation you're in then you should rush Stoneplate. Let's say if you're Tahm Kench and you're just going to be in the back, ready to eat your carry or Q the frontline then in that case I would say you would want to go Knight's Vow first. I think you'll see a decline in Nautilus and Leona, stuff that has to dive in and has to tank everything, but you won't see a decline in melee supports because they're really easy to play around as a team. They have CC, they face check everything for the team and it just makes everything easier for the team.

I remember hearing that you live with Cody Sun as your roommate. So, has is it going through this entire pandemic with him? Have you guys been able to bond a little bit more?

We're definitely close friends and we would describe our friendship as more intense, it can get heated, we go back and forth a lot, but we can talk for hours and hours and at the very end we'll come to an agreement like, this is what we'll do from now on for bot lane. I really like these conversations because it leaves nothing left unsaid, we know exactly what the other person is thinking, and so it doesn't feel like, "oh I don't understand him". It just feels like we're not hiding anything from each other. I think I've learned a lot with Cody just because we're so back-and-forth with each other, because usually I'm pretty non-confrontational, but I kind of like it this way more. It's a little bit more stressful but what can you do? We all want to win.

It sounds like you guys can have a bit of brutal honesty with each other.

That's the thing with being friends for a while, if you can't be honest with each other as friends, then who can you be honest with?

Looking into playoffs and the race to playoffs, what teams do you have your eye on?

For us it's never really been about the other teams, it's always been about ourselves and fixing our problems and playing the game the way that we want to play it. We haven't really focused on specific teams and I don't think we've tunneled and said "oh, we really need to beat C9", usually if we lose to C9, it's not, "oh, C9 played really well", it's about "these were all the mistakes we made that let this one thing happen". I think if we keep focusing on ourselves it doesn't matter what team we face. ___ Izento has been a writer for the LoL scene since Season 7, and has been playing the game since Season 1. Follow him on Twitter at @ggIzento for more League content. Image courtesy of Riot Games For more LoL content, check out our LoL section