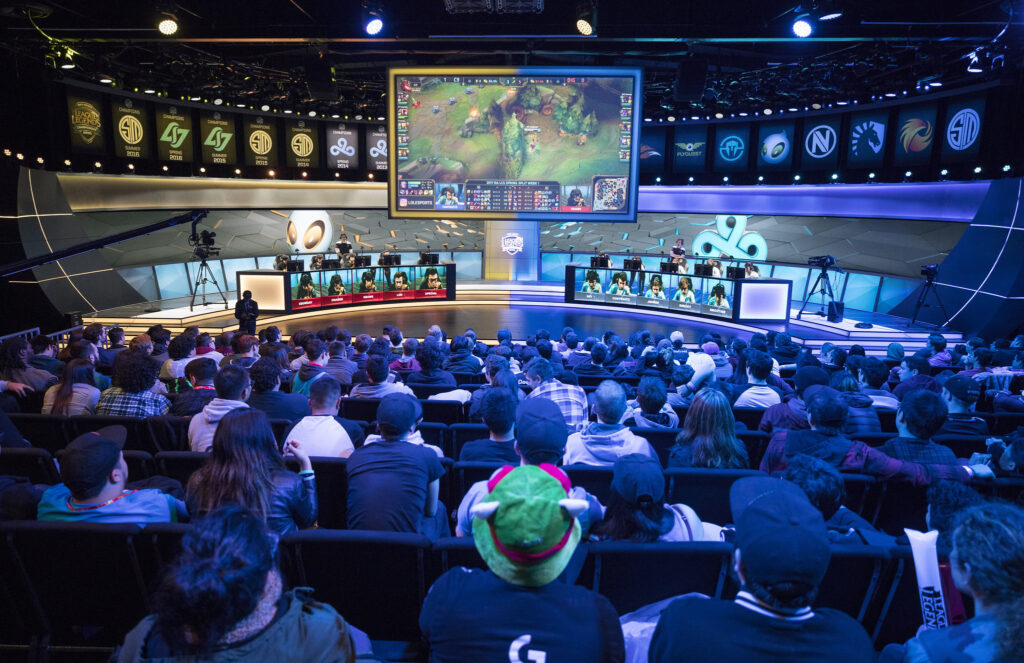 A Look at LCS Viewership Decline Year-by-Year vs. Valorant

Izento 2022-12-20 04:07:24
Recently Riot Games announced they would be moving the North American LCS to weekdays for their regular splits and to many fans it looks like a slapdash attempt to get more viewership for Valorant. Games for the LCS will start Thursdays & Fridays at 12 PM PST and many fans have expressed their displeasure, both because of the early start times, and also because it seems Riot is playing favorites with the newborn baby. VCT Americas will be getting the primetime spot of Saturday, Sunday, and Monday broadcast days with a start time of 12 PM PST. Here we will discuss the possible stats behind why Riot might be responding with cold hard stats. 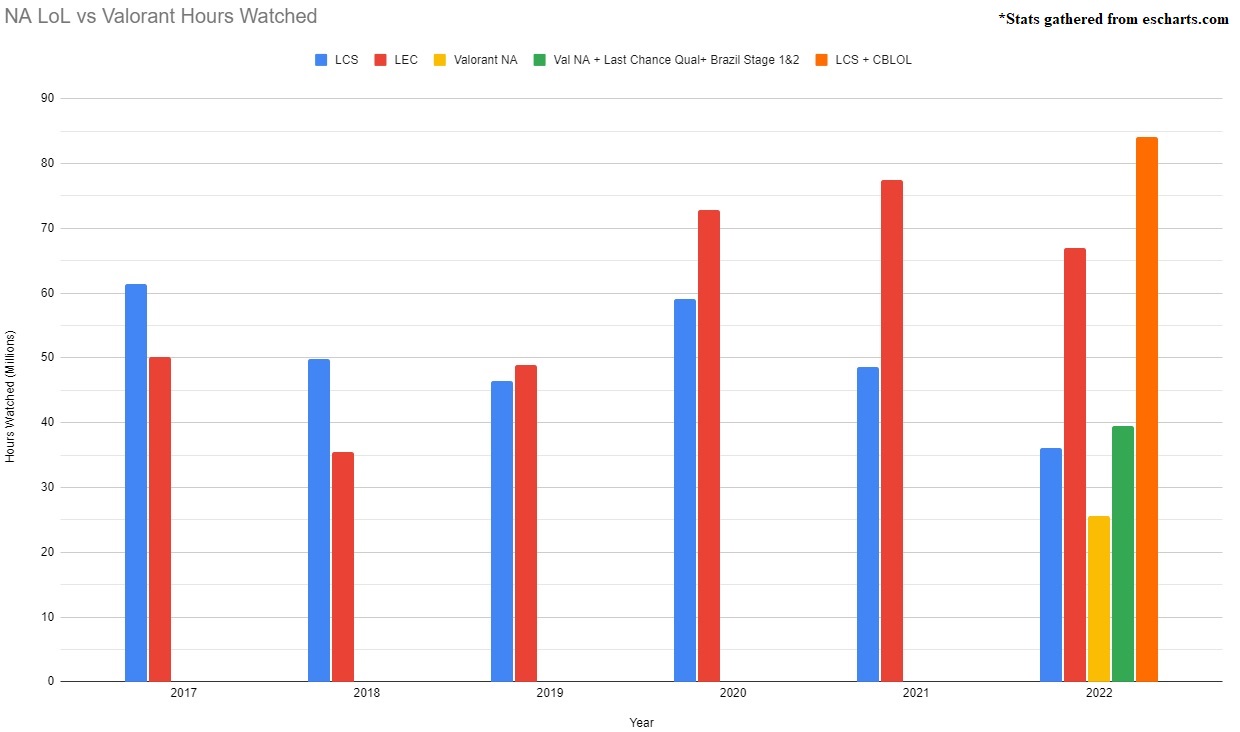 Viewership has been declining for the LCS since 2017 and Riot knows it. The graph above shows the raw watch time hours, which are a much better indicator of the sustainability of a tournament organizer rather than peak viewership. Overall the LCS product has suffered a 41.1% decline in viewership since 2017 going from 61.39M hours watched to just 36.16M. Compare this to their sister European league LEC, seeing a 33.6% increase in viewership, going from 50M to 66.9M watch time hours, it’s no wonder Riot are getting cold feet about their flagship American product and making it more convenient for Europeans to gain access to the viewing experience. Overall, it seems if we just take into account Western fans only watching Western leagues, Riot has lost 7.5% of their viewer watch time hours (unless they’ve moved exclusively to watching the LPL or LCK). Compare this to the VCT (the bar in green), we can see that Valorant is slightly ahead when including Brazil’s numbers and their last chance qualifiers (similar to the regional qualifiers in the past for LCS). Even with the raw numbers of the VCT without Brazil and qualifiers, they’re awfully close to the LCS at 25.61M hours watched. That’s just 41.19% lower viewership than the LCS, all just after only two years running official Riot tournaments in 2021, with the caveat of recovering with the rest of the world from a global pandemic. Watch time hours are a great barometer of health, but watch time per hour of broadcast time is even better. 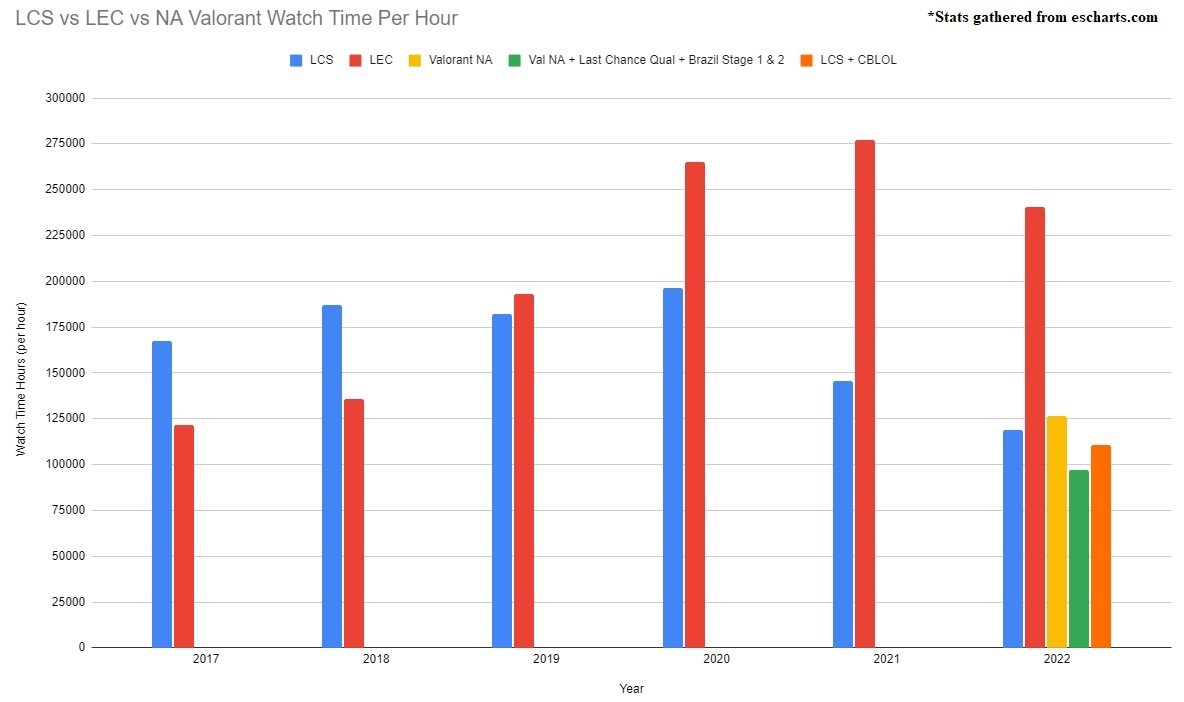 As we can see in the above graph, for every hour of broadcast time, viewers watched 167,577 hours of LCS in 2017. That’s about 19 years if you tried to watch all that by yourself. This still doesn’t do any favors for the LCS as we see in 2021 the gap grows bigger between them and their European ancestry. Heading into 2022, LCS had 119,134 hours watched per hour of broadcast time, NA Valorant had 126,708. If we include Brazil and Last Chance Qualifiers for Valorant, that comes to 97,286 hours per hour of broadcast time. If CBLOL is included with the LCS, their number is brought down to 110,703 hours per hour of broadcast time (LLA was not included because the numbers would be heavily skewed against the overall numbers). NA Valorant is only down by 13.79% when compared to the LCS (with CBLOL). The news of FTX's collapse--the large crypto exchange of former CEO Sam Bankman-Fried-- could have sent Riot Games in panic mode, as it has been revealed that they signed a deal with the bankrupt FTX company for $96M until 2028, which they will obviously not see the full amount fulfilled after a court filing proved only $6.25M has been paid to Riot games. With these numbers in mind, it might give LCS fans some more clarity as to why Riot is seemingly pivoting more towards Valorant and making the necessary moves to secure their financial future. Izento has been a writer for the LoL scene since Season 7, and has been playing the game since Season 1. Follow him on Twitter at @ggIzento for more League content. For more LoL content, check out our LoL section