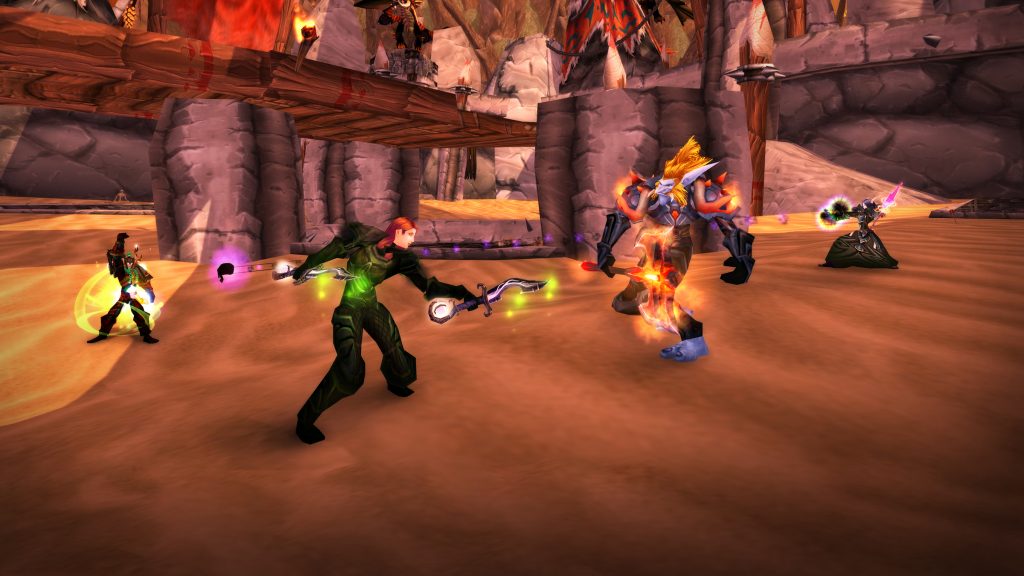 Are MMOs a Dead (PvP) Esport?

I was a teenager in High School watching my character apply a poison to her two daggers from my dad’s high back computer chair. At least, I think it had ahigh back, but maybe I was just not very large at the time. My partner was a man in his twenties who had a steady paying job. He became worse at the game as he got more drunk. When it got late enough, the sound of glass shattering came through his microphone as he threw whatever receptacle was previously around his whiskey against the wall and it turned from a cup into dangerous shards. Somehow, this grown, drinking man who spent his free time playing an MMORPG with a teenage me was not a sexual predator. He was actually a really cool dude.

In World of Warcraft, as in life, your progression in either of its two primary end game modes was marked by obtaining higher level gear. In PvE, or raiding, the game mode that almost defines the genre, the pieces dropped from the bosses you kill. Back then, it was people who decided how to distribute the spoils; this led to no small amount of hilarious internet nerd fighting and often cry-typing.

I just want to say, I got kicked out of a World of Warcraft raiding group once because I rolled for the same trinket that the raid leader wanted and won. They didn’t even tell me, they just didn’t invite me to the group. No one even wanted to look me in my naked eye balls and tell me, “yeah, you’re gone”, because then I’d ask why, and they’d have to admit their glorious leader had pulled a trick most commonly associated with totalitarian dictators in foreign countries. I still got the trinket, though, so suck my ass, Sharon.

In PvP, you could get basic gear through battlegrounds which were unrated and had no matchmaking rating, but in order to go higher than that you had to increase your rating in arena. There were no rated battlegrounds at the time. It was Wrath of the Lich King, by the way.

At the time, I had a philosophical problem with this, because it wasn’t an even playing field. People who were higher rated already had an unfair advantage over any up and comers. As game design, and with the gift of retrospect, it is actually a stroke of evil genius. Not only does PvP get easier as you get better at it, you also get better gear, meaning it gets easier due to skill and gear at the same time. This had the effect of a high reward PvP system, and if you hit 1800 you could purchase weapons—the most impactful upgrade—from the vendor. Maybe the end didn’t justify the means, but I still have those daggers on my inactive World of Warcraft account to this day. It was my first time ever not being total doggy doo doo at a video game in my life. I was sixteen years old.