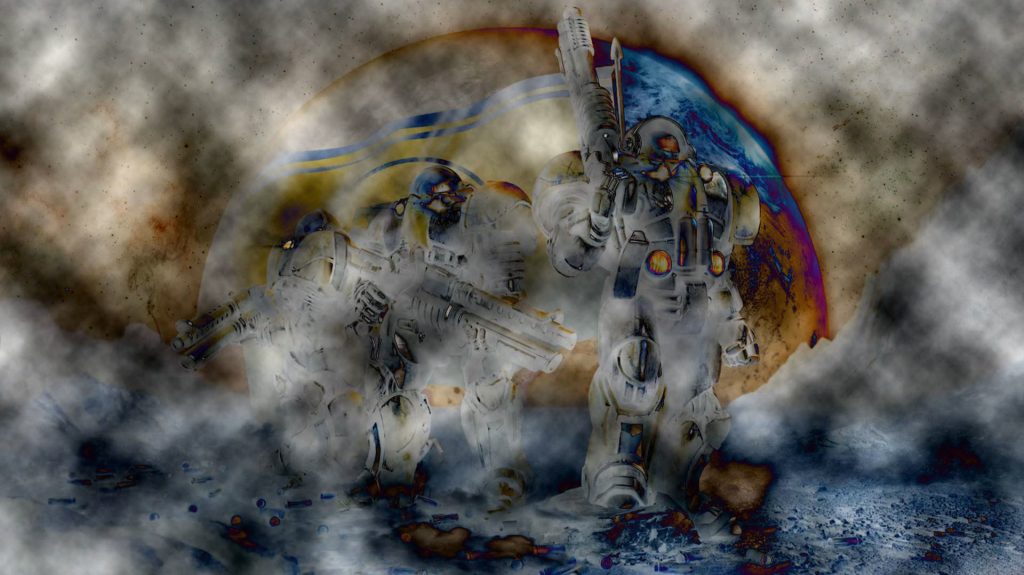 DreXxiN 2019-10-21 01:43:24
There’s some charm in the way humans operate in fantasy and sci-fi media. In the greatest examples, they are flawed but have their spirit and sense of comradery to carry them through - like a superpower in its own right. When badly written, well... they are simply worse at just about everything. With StarCraft Brood War, much like the many real world wondrous records trampled and seemingly unbelievable feats accomplished, we’ve witnessed Terran go from an essentially useless option to the absolute best race when utilized perfectly, as evident by the spread of championship winning players in major circuits. Like humankind, Terrans have developed from brutish, limited beings to utilizing the nuances of their surroundings and tools to create solutions that previously would make no sense...and they’re still developing. This isn’t to say the other races don’t have similarly intriguing evolutionary patterns , but none of them resulted in a complete shift from non-viability to dominance. Terran evolved in a time where the culture of min-maxing and fully scripted rock-paper-scenarios were more scarce -  the early days of the internet. The trajectory of Terran and its viability has extended the charm of the human representative within the StarCraft universe. What is uniquely fascinating about this example, though, is the unintentional presentation of the race through a meta-narrative developed by professional players of the game. During the birth of StarCraft and later, Brood War’s competitive scene, Terran was widely considered the worst race. It wasn’t until a man with the ID of SlayerS_`BoxeR`, later to be dubbed “The Emperor”, took an aspect he learned from first practicing Protoss and utilized it in a manner that no one thought to abuse for the Terran race; thus, the fountain of innovation had begun, catapulting Terran into not just a viable, but terrifying race at the highest levels of play.

“During this time when people would say, ‘Terrans can’t do it!’ I practiced even harder with the thought of, ‘Why can’t they?’” “Looking back, becoming familiar with Protoss strategies helped me greatly in using Terran. Because I mainly used the reaver-shuttle strategies when I used to be a Protoss user, using dropships as a Terran felt natural.”                    -Lim Yo-hwan, Crazy As Me 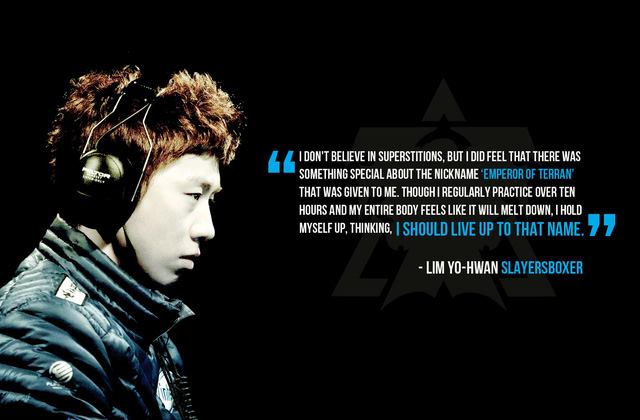 Before we sprout our metaphorical wings, like in metamorphosis, we’re first engulfed in a cocoon - a chamber of stylistic reincarnation that change everything we know about our capabilities. Birth followed by rebirth. Like in most places, humans, compared to more advanced or savage alien species, are weak, less intelligent, and more brittle. Only through working in tandem with one another and through our cunning with tools do we pull ahead against the raw, superior threat of our opposition. We have to work twice as hard and really exploit our opponent’s weakness to stay alive, let alone claim victory (...at least in a hypothetical scenario against advanced or savage aliens.) In Brood War’s infancy,  micromanagement—the ability to maneuver your army units to be more effective—was not really a consideration. If we look at the game in a vacuum, tier 1 units consist of the Marine, the Zealot, and the Zergling. Zerglings were the “weakest” stat-wise, but two hatched out of one egg at the same price as a Marine.  Zealots were the beefiest unit, with what would eventually be balanced out to have 100 HP and 60 Shields (initially 80/80). They cost 100 minerals—so twice the price of a marine—but absolutely demolish them. It’s bad when an early zealot gets in your base now, but back then? You basically lost the game. Much as civilization has evolved to handle these matters, so too did the Terran race.  What could Terran do to stay alive against these superior units in order to build up to their incredible mech line production?  And even when they got to those, how do the Terran keep themselves alive when they have so many more things to do than attack-move? The earliest answer to this was walling. It wasn’t always clean, but to the game engine, it didn’t matter; it did the trick. This one technique gave a very unique identity to the Terran race in competitive StarCraft’s inception and was all the difference between instant death and zero damage taken. 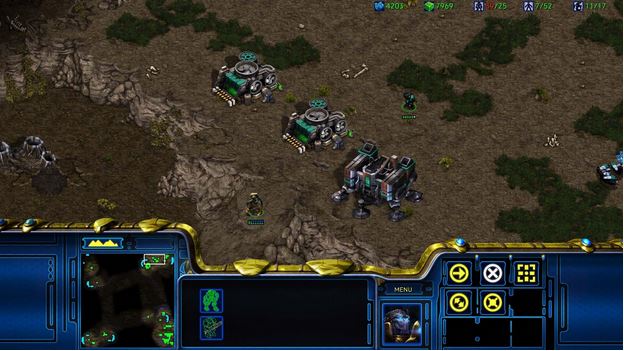 It may not seem like this wall would keep the Zealot out, but it certainly does.

Walling as a technique has gone through many iterations. Usually done with a combination of Supply Depots and a Barracks, full walls were the initial method discovered to stop early assaults from the Protoss and Zerg.  This took a vast investment of time and study on each individual competitive map, with different terrain and building placement causing different units to be able to walk through or be blocked out. In the early years, this was the preferred method to keep the alien races out; however, as time went on and the game became more nuanced, it would no longer suffice outside of more niche circumstances.  New problems arose. People started expanding faster and macroing—that is, managing their economy and production—better. The importance of army flow out of several factories was likely the largest contributor to the death of this one-size-fits-all solution. While walling still exists in map-specific circumstances—generally to get away with a greedier fast expand opening, such as Command Center first—the natural evolution to this was an enemy unit funneling method by what the Brood War community dubs the tactic as “sim citying”. This may always have been the most efficient method all this time; however, players were not good enough at micro for this to work, especially given how much more common one-base openers were back then. As the game evolved, more macro-oriented playstyles were deemed “standard” and more optimal in the majority of situations.  As is natural in the primitive beginnings of an RTS’ lifespan—especially one as old as the original StarCraft—the game was far more rush-centric, punishing greed and shutting down all but the best executed defenses with the looming threat of early all-ins.

“Edison, who was ignored numerous times for having ridiculous thoughts, Denmark's Dalgas, who cultivated the barren land that was considered impossible to farm, the Wright brothers, that realized humanity’s dream to fly, and many others persistently pressed towards their goal with firm conviction and volition and stood their ground. There is probably no one who has pioneered a new life without going through numerous oppositions, failures, and trials.”   [...]   “At the time, Terrans were rated as the weakest of the three races. To put it briefly, it was a period when Terrans were viewed as nothing, so no one saw me as a winning candidate. It was not surprising, as I did not play against a single Terran from the 16th rounds to the finals. Today, many say that one must defeat a Terran to win the finals, but at the time it was only expected for a Terran to lose, and they were only thought of as an extra that the Zerg or Protoss passed through as they won the finals.”      -Crazy as Me

Indeed, the examples presented here are quite similar to our eventual perception shift for Terran. Much like the compounding progress through the Wright Brothers demystifying flight or Edison by helping illuminate our living spaces, so too did others carry the torch on innovation of Terran play. Whether it was Lee "NaDa" Yoon Yeol, the Genius Terran's consistency and speed setting the standard for future Terran stars, Choi "iloveoov" Yun Sung's robotic macro, or Lee "Flash" Young Ho's eventual perfection of the race altogether, it all started with the indefatigable will of a few, which rippled out into hope for the many. The doors are open for humanity’s beautiful potential, and we see that depiction carried over by the 21-year development of the Terran race. With a watchful eye over the metagame from most esports developers nowadays, the growth of any particular option is stunted or at best halted before we can see optimized play for some options to prosper. In a hypothetical universe where the game launched in the current internet climate, no doubt the race’s capabilities would have been discovered sooner; however, in a time without VODs (or hell, even replays very early on) and far fewer resources, it took the faith and grit of Terran’s early pioneers to turn what without them could have made for a two-race esport. _____ The game has barely received any balance patches since its inception, much as people have largely gone unchanged on a physiological level. Sometimes, evolution is just a matter of initiative and a wild imagination. While modern game development stunts this kind of transformation, we need only to take a trip down the annals of history to show these things can occur, and perhaps we’re stunting the beauty of development with premature developer intervention. Header art courtesy of Blizzard Entertainment. Michale 'Drexxin' Lalor is the Editor-in-Chief of Esports Heaven. You can follow him on Twitter at @ESHDrexxin.