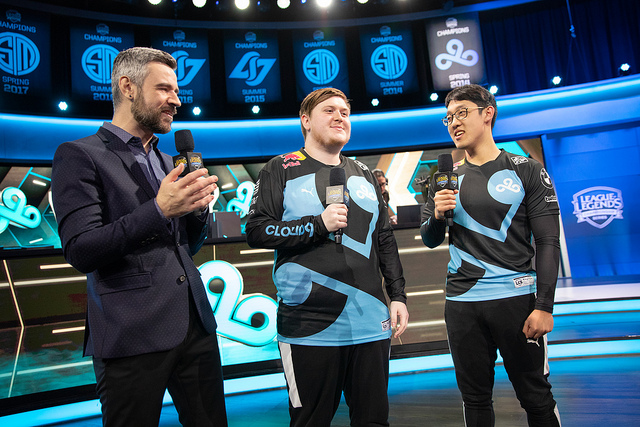 C9 Keith on his best selling point: “I’ve been through four supports in Academy with Zeyzal, Smoothie, Feng and Diamond, and I’ve done well with all of them,[…] like no matter what support I play with I can do really well with them.

Izento 2019-03-26 02:56:15
Cloud 9 have defeated Clutch Gaming in a brutal series of domination as Keith got first blood and a BF Sword just under 5 minutes. Esports Heaven spoke with Keith after his victory to talk about his game against CG, if he's LCS ready, past fan criticism, champion pool and his big selling point to teams looking for a ADC to join their starting roster.

How does it feel beating Clutch Gaming with your Academy roster as a whole team?

It definitely feels really good for our whole team to win but at the same time CG were doing some weird experimentation with Piglet mid and since they’re already locked in at 9th or 10th it kind of feels like an exhibition match. There’s nothing really at stake here, it’s just trying to put on a good show for the fans. It definitely feels good to win but there’s not that much pressure on anyone.

You popped off on Jinx early on and then Lira tried to gank you and you got even more kills. So, how do you think Jinx fits into the current meta?

I think Jinx is strong and for one, I don’t think anything really counters her extremely hard. You have to draft a lot of dive like Galio or Kai’Sa and kill her like that but at the same time if the Jinx is good you still can’t even kill her. If you don’t dive her she’s just going to rocket and hit two or three people with her crits and you’ll just kill everyone.

Do you think after this game it shows that you as a player are LCS ready?

I think so for sure. For me personally, compared to when I was on C9 in Summer I kind of put too much pressure on myself and that lead to me choking a bit because there was a lot of pressure from the community and it kind of affected me while at the same time wanting to perform well. I think I just had a negative attitude about it. For this game since there was no pressure because it doesn’t really matter for standings, I could play with confidence. Obviously if I had to play for an LCS team I can easily play with that kind of confidence and I’ll do extremely well.

When you were exiting the LCS during that era, it was said that you were having a little bit of confidence issues and of course with the entire community flaming you. It was a crazy exit from the LCS stage. Do you feel you’ve recuperated from that and you’re able to have confidence now?

Yeah it was definitely pretty rough subbing in for Sneaky because he has such a large fan base, so I got criticized a lot, but honestly I feel I’ve recovered immensely from then and I’ve even gotten stronger mentally. I feel like whatever doesn’t kill me makes me stronger, and even with these past years when I haven’t done so well, I feel like I’m definitely stronger than ever before and I’m definitely smashing Academy.

What do you think about flex picks right now? I know not every fan may watch both Academy and LCS. Is that kind of in your wheelhouse as far as champion pool?

Since you feel you’re ready for the LCS stage, what’s you main selling point to teams going into the Summer split that may be looking to add a new ADC to their squad?

I’ve been through four supports in Academy with Zeyzal, Smoothie, Feng and Diamond, and I’ve done well with all of them, so I feel like I have something going on, like no matter what support I play with I can do really well with them. So, I think I’m just really easy to work with anyone honestly. I think I bring a really good atmosphere and I also think I’m really good at the game too.

Anything to say the LCS fans?

For those that support me, thank you so much. I’d like to especially thank C9 and Jack for building this amazing culture and atmosphere that’s helped me grow, even as an Academy player. Big thanks to them and to the fans. Keep supporting us! ___ Izento has been a writer for the LoL scene since Season 7, and has been playing the game since Season 1. Follow him on Twitter at @ggIzento for more League content. Image courtesy of LoL Esports Flickr