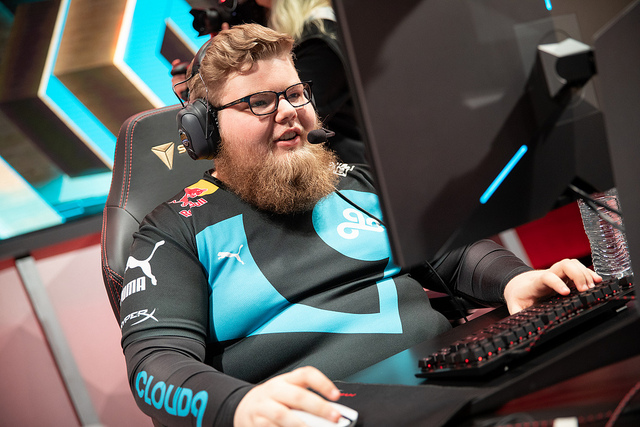 C9 Zeyzal: “I think a champion, at max, should be flexed to two roles. That’s a limit that should be somewhat intended because if you have a champion that is blatantly so strong that can be played in 4 or 5 roles, then obviously the champion is too strong, it doesn’t fit every role, it’s just broken”

Izento 2019-03-01 04:46:27
Cloud9 are locked in second place as they had a successful 2-0 Week 5. Their game against FlyQuest had them lock in Galio, the first one seen in the NA LCS at the support position. Esports Heaven talked with C9 support player Zeyzal about their game against FLY, Galio as a support, flex picks, tips on initiation and practicing unorthodox picks in solo queue.

The beginning of your game against FlyQuest didn’t go so hot. What was the early lane phase like from your perspective?

They went for an aggressive all-in level 3, which is standard for Alistar. I don’t think I had to flash there when they went for me but I did because I haven’t played that matchup honestly, so I wasn’t going to take the risk. So, I flashed away and not even a minute later I had a Sejuani in my lane, got a nice pick and we actually could have won 2v3 but I ignited Sejuani instead of Yasuo because they were stacked on top of each other. So Yasuo left the fight with like 13 hp without the ignite. I was pretty sad about that but I didn’t even say anything to the guys, I was like, “don’t worry guys”. After that, we died again (laughs) before I had my flash up again. Pretty much an 0/2 start but we didn’t lose any pressure.

So, you played Galio as support. I know this has been played in LCK a little bit, but what’s good about this pick?

It’s just super strong. Lots of crowd control, global ultimate, which is always useful, and his zoning is just really strong. If you don’t need to be the primary initiation, Galio has super good peel and then he has a lot of damage because his base damage has always been high. Your laning is usually pretty safe too.

There’s been a lot of flex picks recently. What are your thoughts on flex picks? Do you think it’s healthy for the game?

I think a champion, at max, should be flexed to two roles. That’s a limit that should be somewhat intended because if you have a champion that is blatantly so strong that can be played in 4 or 5 roles, then obviously the champion is too strong, it doesn’t fit every role, it’s just broken. I think it would be healthy for the game if the champion is good at two roles at max, like mid and top swaps, I think that can create a lot of interesting matchups. Also, flexing causes a lot of teams to pick red side. Pretty much every team picks red side against us, so I guess the value of flex picks are really strong on red side because you can hold your counter-pick for last and usually they have to be like, “so, I have to blind against these two picks, or I have to blind against mid or top, but then get counter-picked anyways”. So, I think it’s dangerous if you’re on blue side, but it feels pretty good when you’re on red side.

Your playstyle in general is known for initiation. What are the key points to understanding how to initiate?

The key to understanding initiation is formation. You have to understand who is going to be blocking you from what area and whether or not you can get past them. If you’re against an Orianna as Alistar, if you run straight at her, she’s just going to chunk you and back out. Now, if you’re against a Galio for example, if he blocks you on the side, maybe your best goal isn’t to flank, whereas with Orianna the best goal is to flank so that you get them from a surprise angle. So, mostly it’s about knowing the formation of the enemy and how you can abuse it. If you’re coming from the side, who can block you? Who can stop you? If you’re coming from the front, who can you threaten? Who can threaten you? It’s a lot of knowing whose timing it is. Timing is, who has more people in the area? Do we have five? Do they have five? So, the most important things are timing and angles.

What are your thoughts on practicing in solo queue, especially on untraditional picks like Galio as support?

I think practicing in solo queue is pretty low value, especially right now. It’s good to get the mechanics of the champion down, but honestly, every lane becomes a kill lane. One bot lane is 0/10. I was duoing with KeithMcBrief the other day and I was playing Gragas and I had like nine kills as Gragas in seven minutes. I don’t think that’s going to happen on stage, but it is good for mechanical practice. ___ Izento has been a writer for the LoL scene since Season 7, and has been playing the game since Season 1. Follow him on Twitter at @ggIzento for more League content. Image courtesy of LoL Esports Flickr