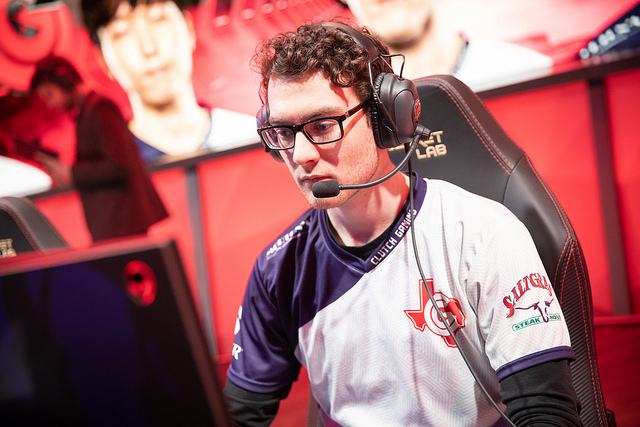 CG Vulcan: “I want to make the team better and in the meantime I guess that just makes me better. I’m just trying to be the best I can be and have my team win, so I’ll focus on that for right now”

Izento 2019-03-01 04:00:02
Clutch Gaming have gone 1-1 during Week 5, losing to OpTic Gaming but more interestingly having a flex pick extravaganza against Golden Guardians. The game against GGS started with immediate action and a kill in three minutes. Esports Heaven spoke with support Vulcan about their game against GGS, coaching staff managing Korean players, possible divides in the team and his personal growth expectations.

Obviously pretty poorly but at the same time we had champions that are hard to play against if you’re not used to playing against them. As bot laners, you probably aren’t going to know how much damage Irelia can do. It’s really weird because there’s a mechanic that she can stack over time with her Q and stack damage every time she Q’s and it’s kind of hard to keep track of that because for people that don’t play against her frequently will just get bursted and one-shot against her. We practiced it this week and most of the time we killed the bot lane 2v2 since they didn’t know how much damage we could do.

You said you practiced this before. Now, there was a ton of flex picks this game. Was this something you guys practiced quite a bit as far as flexing between all the lanes?

Yeah, we’ve been trying to flex more because it gives a good advantage in the draft when the enemy team doesn’t know what they’re playing against. It makes counter picks and matchups a little easier across the entire map. This is usually what Griffin does as well too as they usually try to flex as many picks as they can. We kind of got that from them.

Honestly I think its fine. We have a Korean assistant coach that helps a lot. If there’s a problem, someone’s going to bring it up because we’re very direct, so that’s a good thing from us. If there’s an issue, I don’t think there’s a Korean or American segregation. Mostly the whole Korean thing, since I’m a rookie and my communication isn’t as good as say an Aphromoo or Smoothie, my communication is a little average for now and I’m working on that, but also the Koreans their English isn’t as good as an NA native as a first language basis. That all together makes it hard for now but we’re trying to get everyone to talk more and we’re just taking more time to mesh because of those reasons.

I know that sometimes teams can suffer from a divide or what you were talking about, a segregation of a team like a Korean clique and NA clique. Do you feel this is maybe this is what’s going on within CG, that there are two groups and it’s very difficult for both groups to mesh together? Or do you view it as one entire entity?

I think there’s a bit of a rift. I’m pretty close with Tanner, because of the language barrier, but Huni is kind of a bridge to that because he’s probably the most American Korean I’ve ever met. He kind of brings the team together in a way.

What are your expectations this split for your own personal growth?

I’m not too focused on my own growth. If there’s a job that needs to be done on the team and I can pick it up, then I will because that will make me better personally, but ultimately that’s not really my goal. I want to make the team better and in the meantime I guess that just makes me better. I’m just trying to be the best I can be and have my team win, so I’ll focus on that for right now.

Anything to the fans or something you’d like to add?

My parents just came from Quebec and I have a 100% winrate with them being here, so I guess they’re my lucky charm. We’ll see if that continues tomorrow. ___ Izento has been a writer for the LoL scene since Season 7, and has been playing the game since Season 1. Follow him on Twitter at @ggIzento for more League content. Image courtesy of LoL Esports Flickr