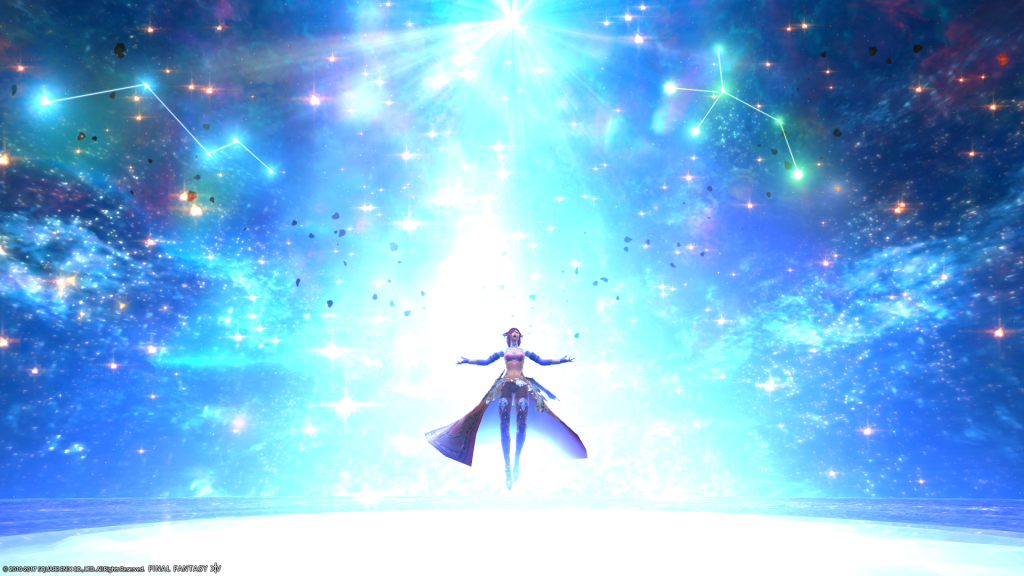 Mar Reed 2021-12-29 02:53:19
With Savage less than a week away and this being the first foray into difficult raid content for World of WarCraft refugees, I’ve compiled some key changes in the roles between games. For the sake of brevity, I attempted to not dive too deep into individual abilities and healer kits and focused more on overarching themes of the role in its entirety.  Let’s dive in! DPS/HPS Tools and GCD allocation in World of WarCraft, the healing component is a lot more active. in FFXIV, it’s a lot less active, though it wasn’t always this way. In WoW, it’s mostly accurate to say that the “spammable” bread and butter abilities are utilized proportionally opposite to their FFXIV counterpart. What I mean is that in FFXIV, as you find comfort in your job and the encounters, 80-90%~ of your GCDs are going to be your single target DPS nuke. In WoW, most of your GCD allocation will be whack-a-mole spot heals and typically an AoE heal that targets some, but not all of your raid on a short CD. Interestingly, while most of your CPM (Casts Per Minute) are emphasized on actual healing upkeep in WoW, WoW healers still have more DPS buttons, you just don’t use them as often (barring Discipline Priest and Holy Paladin). FFXIV healers generally have many more healing tools, but the most powerful ones are often relegated to an oGCD (off-global, weaved inbetween the GCD). By contrast, WoW healers have less tools, but they’re used more often. DPS (expanded) Even in the case of the newly released Sage which has the most robust DPS kit, I’m pressing Eukrasian Dosis, Dosis, Toxikon, Pneuma, and Phlegma on CD for single target boss damage. Three of these have the exact same potency, but have other use-cases. I’d use Toxikon for mobility, and Pneuma when I also want to throw an AoE heal on the party. On Discipline Priest, I’m pressing Schism, Smite, Penance, Mind Blast, Shadowfiend, Purge the Wicked, Power Word: Solace, and Shadow Word: Death. Every 3 minutes, I’m using my covenant ability, which then allows me to alternate Ascended Blast and Ascended Nova on a two-to-one ratio.  Each of these abilities do significantly different things, and most are optimally used inside the Schism window for bonus damage.

The Discipline Priest DPS is more complicated, but offers less relative DPS contribution to the raid compared to FF healers. While the disparity between a healer's DPS and an actual damage dealer's DPS is much larger in WoW, this can also be attributed to there being 4-6 healers commonly in WoW while FF always has 2. Healing/Mitigation CDs Healing CD’s sort of existed prior to Endwalker in FF, but it was mostly in the form of enhancements to GCDs already within your toolkit. Otherwise, the standalone tools you work with are things such as Scholar’s Indomitability, Astrologian’s Earthly Star, or White Mage’s Assize. These are certainly very powerful tools, but are contextually incomparable to WoW CDs typically assigned by your Raid Leader like Resto Druid’s Tranquility,  Mistweaver Monk’s Revival, or a Venthyr Holy Paladin’s Ashen Hallow - all of which are typically 2-4 minute cooldowns, give or take. As of Endwalker, with the addition of things such as Lilybell, Macrocosmos, and Panhaima, that is finally changing...well, hypothetically. Historically, the raid’s damage received hasn’t ever been proportionally matched by the ever-increasing power of healer arsenals, but it’s worth mentioning should this change. The current extreme primals both have stacked raid AoEs that pulse, where these abilities are, honestly, too powerful, but not at all necessary to deal with the incoming damage. Otherwise, prior to this expansion, a “big healer CD" was simply spamming Helios/Cure III/Succor as much as you can, as they don’t have a cooldown and hit every player in the raid. In terms of mitigation, CDs in WoW are much more powerful, but on a much longer CD.  See Power Word: Barrier or Aura Mastery in comparison to Sacred Soil or Collective Unconscious. 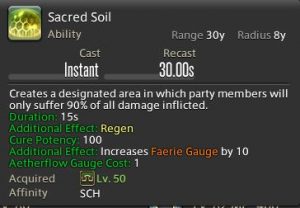 It's worth noting that abilities such as Power Word: Barrier hit the entire raid of 20 people, while most AoE heals hit a limited amount of players within the raid. This makes these cooldowns stand out, as it is atypical compared to FFXIV, where almost every tool in a healer's arsenal hits all 8 players. Between these are various long cooldowns, including raidwide mitigation abilities, healer throughput CDs, utility, and more. These range anywhere from 30 seconds to 4 minutes. Utility CDs Once upon a time, Astrologians had utility cards that restored resources, reduced GCD, and so on. That is no longer the case, as in Shadowbringers onward, all “utility” brought to the healer kits were strictly damage.  All Astrologian cards became damage, Scholar brought Chain Stratagem, White Mage brought…just big personal damage, pretty much. Now that has changed with Scholar having Expedient, which serves as increased movespeed for the whole party as well as some damage mitigation. This still remains the sole exception, however. 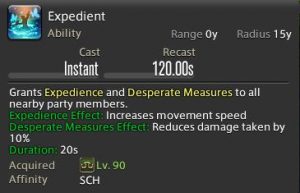 This is significantly reduced from the utility CDs provided by healers in WoW, as well as the variety of them. The closest comparison to Expedient would be Druid’s Roar, which can be used in Restoration spec.  All healers have Rescue, which is a very unresponsive form of Priest’s grip and is far less versatile.

Other than that WoW healer specs such as Restoration Shaman and Mistweaver Monk have ways to keep enemies back (which is relevant due to the significant amount of AoE involved in many WoW encounters compared to FFXIV). Shamans and Druids also can help regulate mana usage to their fellow healers through Mana Tide Totem and Innervate. Finally, all of the WoW healer specs have various lockdown or CC abilities. Intra healer variety It’s worth noting there’s a much greater disparity between WoW healers than there is for FFXIV healers, so it’s difficult to make a blanket statement. That said, Every single healer in FFXIV has one dot, and one nuke as their DPS upkeep with occasional other abilities sprinkled in. Dia into Glare, Biolysis into Broil, Combust into Malefic, Eukrasian Dosis into Dosis. Not only do WoW healers have many more DPS abilities (that you do use less frequently), their general gameplay loop is very different. FF healers also typically have one single target healing GCD, a stronger/enhanced single target healing GCD, and a shield/HoT single target GCD, and the same applies to AoE heals with little variation. There are some unique flairs, such as White Mage’s ability to Cure 3 the entire raid in a stack repeatedly as MP allows, or Scholar’s ability to command a pet to throw out heals independent of their own location and death status debuff (Weakness/Brink of Death, explained later). In WoW, the way you take care of your raid varies—not even just between classes, but between specs. For example, Priest has two healing specs. As Discipline Priest, you’ll blanket atonement by applying 5-7 Power Word: Shields and/or Shadow Mends across your raid, before using 1-2 Power Word: Radiance casts, and then go through your DPS rotation, of which is a lot more involved than modern FF healers.

Snapshot of a proper Disc Priest ramp via IcyVeins

In contrast, Holy Priest is a much more conventional MMO healer. You use Prayer of Mending (a heal that bounces) on cooldown, Circle of Mending on cooldown to heal at least 4+ raiders, Holy Word: Sanctify as a targetable AoE heal (similar to Cure III),  and Holy Word: Serenity on cooldown (similar to Tetragrammaton). This, of course, doesn’t even touch the surface of variety in WoW, as the other specs are very different from these starkly contrasted ones already presented, and then you add Talents, Soulbinds, and Legendaries on top of that, and you get quite the variety (arguably, at the cost of balance). The last thing to mention is itemization outside of legendaries. In WoW, healers have proc-based trinkets that have tons of different uses (listed below.) In FFXIV, every piece of gear is a stat-stick, and generally amounts to “heal/damage number go up or down”. Mechanical responsibility There’s a lot of ambiguous mechanics in WoW, and lately, fairly randomly assigned mechanics in FFXIV as well. Perhaps more a matter of culture than game design, a lot of additional responsibility will fall on healers if there’s a choice between healers and DPS for a mechanic, in the name of uptime, whereas in WoW, DPS are more willing to take care of these.  A good example is the bombs in De Other Side against Millhouse. If that same encounter existed in FF, there’s a very good chance in a coordinated environment the healers would be tasked to do it. 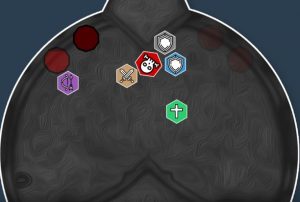 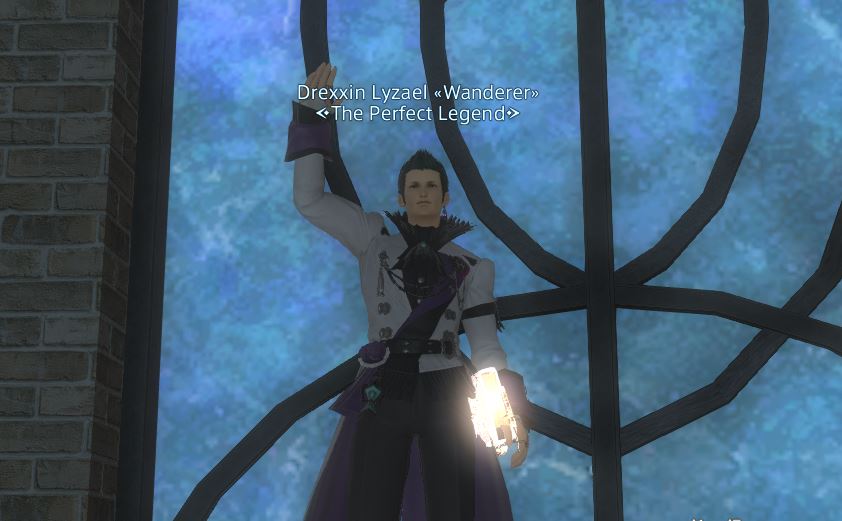 Michale Lalor is the Editor-in-Chief of Esports Heaven, with World Progression experience in FFXIV and Cutting Edge experience in WoW. If you enjoyed this piece, follow him on Twitter at @ESHDrexxin. Cover image from Reddit user Bwadark Sage rotation image from The Balance Discord server/community