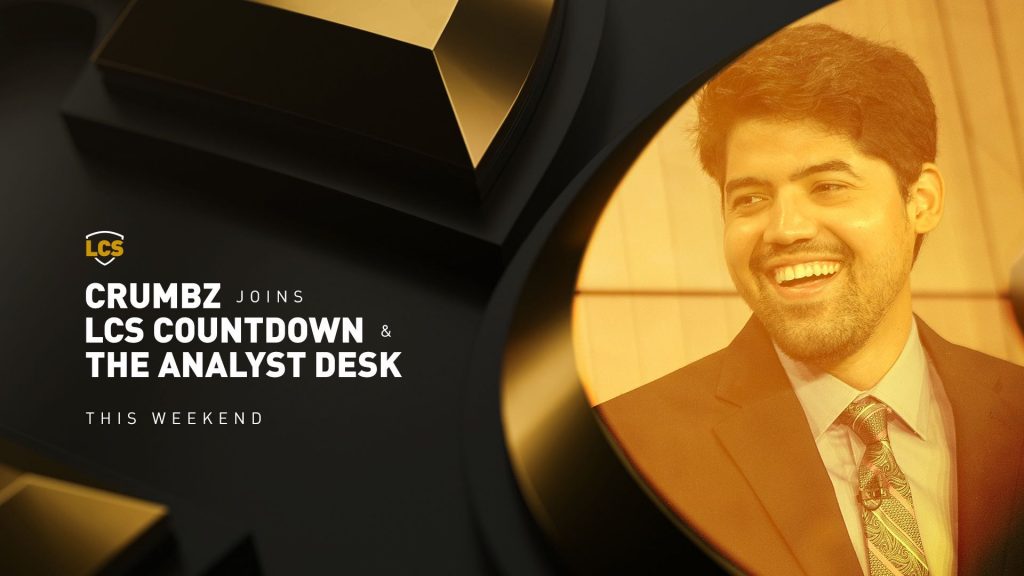 Crumbz on his time in OWL compared to LoL: “When I felt like something was off, I felt like I couldn’t say what I wanted, I had to sugarcoat my words.”

Izento 2019-03-07 11:50:35
Crumbz has returned to League of Legends, and specifically the LCS broadcast as an analyst. Previously Crumbz was a professional player for most notably Team Dignitas and Renegades before moving to the analyst desk in LCK and finally to cast the Overwatch League. With the slew of layoffs that Activision-Blizzard dolled out, Crumbz was among them, although a little earlier than the rest. Esports Heaven got an exclusive chat with Crumbz on his time in OWL, the difference in analysis between OW and LoL, if he had any regrets casting for OW, and his return to LoL.

How was it working on the Overwatch League analyst desk?

It was a learning experience. The biggest want that I had going into OWL was that I had the impression that all the things that worked well in LoL were the things that they wanted to do. I think that in LoL, part of my approach was being very critical, but that was because I would take the perspective of the actual player, both the pro player and the casual player at home. Often times when you’re watching the game, or you’re watching someone like Tom Brady (NFL football quarterback), you’re still going to call him out, right? And you’re still going to say, “that was shit”. That’s a certain level of honesty that I tried to carry through a lot of things. That was one of the hardest things where I felt like I couldn’t do in OWL. When I felt like something was off, I felt like I couldn’t say what I wanted, I had to sugarcoat my words. That was a little rough and hard to get used to. Especially coming back from LCK where that was all I had. In Korea, this is how it runs: “Okay, the show starts in 5 minutes. I need you on the desk 1 minute before the show begins”. The show begins with a countdown and then, “Okay, the shows ending guys”. That’s the entire conversation with production. You can see the things that one can say are way more liberating and the OWL taught me how to work in that team environment where they want to craft a certain narrative, which I really appreciated because I think I needed a lot of help in that regard. I think the talent is very polished in a lot of these areas, knowing how to work off of a script properly and just working as a team very well. OWL was really nice for that.

Did you find Overwatch more difficult or League of Legends in terms of analyzing the game?

In a way, both. When I was doing it the meta was, Mercy, Widowmaker and Brigitte; that was the trajectory that the meta had. The hard part for me was when I first looked at the game, I felt it was a lot simpler than what it was made out to be in the sense that during the Widowmaker meta, if one Widowmaker takes out the other, and say one of them stays alive is Birdring, it’s pretty much a lost fight for the enemy. 5v6 you’re not really going to have a chance and it was very similar statistically to champions like Mercy. I felt like I wasn’t able to communicate that to say, “hey, Widowmaker just took out the other Widowmaker, this fight is over”. That was something that I felt the game looked that way from the pro perspective because players would speak this way as well. “Widowmaker is out, just play it slow and around ‘this’. We’re gonna have to reset and we don’t want to take these fights anymore. So, it was hard to find the balance between, where do I say the game is at? Because the players feel the game is at this state. Or will the viewers also see it this way, or will they not? What about the actual people that hired me? Will they see the game this way? It’s a similar thing where, if one gets taken out and you say, “no, that’s not how it is. The fight is still going”! Then they get wiped out and you kind of look like you’re talking out of your ass. That rarely ended up happening…not that I never did, it probably happened all the time, but the fight might be going the other way and the team that has no Widowmaker ends up winning. I also got to see guys like Jayne that go so in-depth about the game. The game is so fast paced that you don’t actually have room for analysis because the players themselves don’t analyze the game. The players don’t think about the game that way. You look at the fights, they got like 3 seconds and the most coordinated thing is, you go into the comms and it’s just like, “we just yelled” (laughs). The players are not aware of the intricate things that they’re doing. They’re not conscious decision half the time. So it’s really hard to say, “oh, this guy did this, then he did this, threw this ability out that way, etc”. I mean, yes, that did happen but to say that’s the reason why it happened is because of an incredibly quick mind that somehow sees 30 steps in advanced and knows the micro mechanics of this, no, it’s really just reflexes and it’s your muscle memory that understands the situation a million times and knows that Tracer with pulsebomb can stick it onto the D.VA de-mech. He knows the exact timing and you can describe it that way but really it’s that he’s done it a million times and he knows how to do it now but there’s no thought behind it. He knows how to throws these abilities and he knows that when the Zarya says “Grav”, I save my ult and I use that to combo together. It’s never some crazy laid out plan. I found it really hard to balance out as well because compared to LoL, granted at the highest level you don’t have the most amount of time to think out these decisions, you still have more time than Overwatch. There isn’t a much more obvious ebb and flow where you’re stalling, or you’re turtling and searching for vision and legitimately setting up your next play without giving up any kills. It was difficult to convey that sense of urgency in Overwatch because I think people were expecting the same level of detail to the game that I would bring to LoL as with Overwatch. From the player standpoint, that’s not how the game was in my eyes.

Do you view your time within the OWL as something which you prized or did you regret switching to that game?

I don’t regret it. I don’t think the biggest thing was switching to that game, it was the position I had in LoL at the time—which was pretty sweet, not gonna lie. Being in Korea, casting LCK, everything was going fine, but I took the position because I wanted a challenge. Obviously being in a position of what I just mentioned was very comfortable because I know exactly what my next year would look like. That’s what I didn’t actually want. I don’t want to know what my next year is going to look like, I want to see what happens out of this. Taking that was definitely a positive experience because I was able to try and apply the things I knew would work in one game to the next. It was a learning experience and I think that the fact that I’m not there this year is an indication is that I needed to learn what exactly happened, where did I go wrong, what elements came into play that made this entire situation, which actually I still don’t know why I got let go. I don’t even know if Reinforce even knows, but I don’t know (laughs). I haven’t even asked, at that point I was just like, “you do you”. They fired 10% of their staff so I figured at least I got the early train on that one which was pretty nice.

What’s next for you and your career? You’re back with Riot. What’s your position, what are you going to be doing? What’s your outlook for the rest of the year?

I did not expect to be back with Riot at all. In fact, I planned my year—maybe a little too poorly but I guess that’s what you need sometimes— to simply be back in the States for one year. I saved enough money for that and I got my visa, so I was just thinking that I was going to find something to do here. Usually I found work in production or working with other people that are in the space, trying to solve their issues whether it was tech or management. In the midst of all of that, Riot contacted me and said, “hey, do you want to be back on the show”? I said, yeah, that would be cool. So that’s what happened. I was not planning on it whatsoever, so I think that now I’m going to roll into it really hard this time around. There’s a lot that I learned where I could do better and do differently and keep trying those things with LoL and see where it goes. I think it’s going to be a lot more fun this time around. I think I’ll probably look to casting other titles as well that are not as big of a commitment as doing OWL all year because I don’t think I would want to cast OW in the first place as an actual shoutcaster, but maybe other opportunities for other titles will produce themselves that are not as intense, as in I wouldn’t need to be in Burbank (where OWL studio is located in California). I think maybe OW has a certain expectation out of the talent that they kind of need to be kind of impassioned by the entire beginnings and endings of the scene. It seems like the community doesn’t take lightly someone coming in that says, “Hey, I’d like to check this out”. It’s like someone opens the door to a party and says, “Oh, am I invited? Did you go to the pre-party? Did you check-in before? Did you do all these other things? Were you here back when when it was 21 heroes”? It’s like, “Alright, well you’re not welcome”. I just want to make it clear that I’m very happy with my time in OWL and most of the things that I said were exaggerated in jest if it sounds a little rough. ___ Izento has been a writer for the LoL scene since Season 7, and has been playing the game since Season 1. Follow him on Twitter at @ggIzento for more League content. Image courtesy of LoL Esports