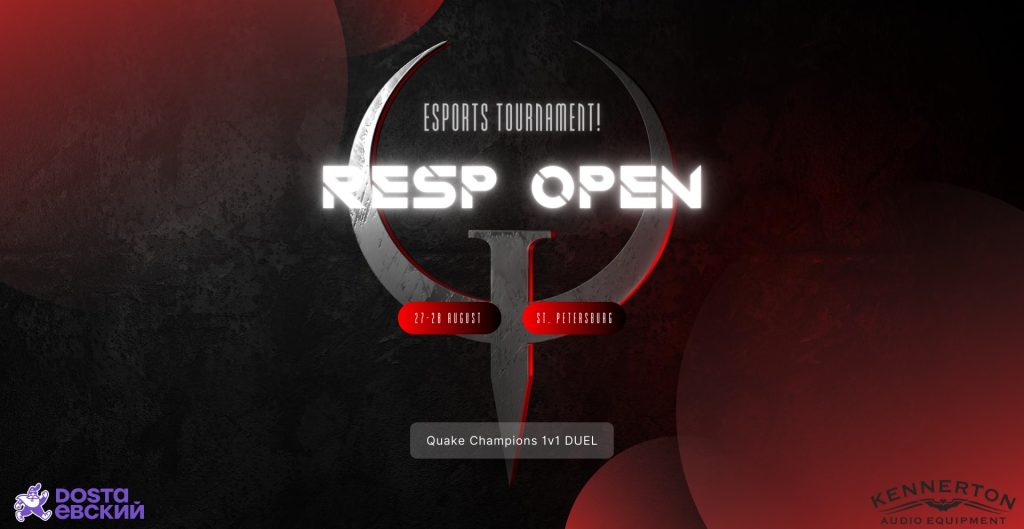 RESP Studio has announced a Quake Champions duel tournament with a prize pool of $5000. The event will take place at a LAN cafe in Saint Petersburg on August 27-28. rapha and k1llsen are among the players who've stated for Esports Heaven that they won't attend; many more QWC participants are unlikely to. cYpheR and DancheZzor set to participate.

The Russian Esports Production (RESP) Studio was founded earlier this year by Yuri "Frozen" Romanov and Andrei "Nullxdth" Tikhonov. It focuses on the arena shooter subgenre, covering Diabotical in addition to Quake titles.

In May, the studio held RESP DUEL, a LAN event composed of separate, single-series showdowns in Quake Champions and Quake Live. The matches featured a number of Quake legends and well-known veterans, including Alexei "cYpheR" Yanushevsky, Anton "Cooller" Singov, Zhibo "Jibo" Fan, Nikolay "AGENT" Mayorov, and Alexey "swex" Mednyy. Romanov, a caster as well as a co-founder, likens the format of that event to the Ultimate Fighting Championship in mixed martial arts.

The upcoming RESP OPEN LAN, set for the last weekend of August, will be a traditional duel tournament with 48 participants. The event will take place in the COLIZEUM Prosvet, one of 16 venues in Saint Petersburg that are part of a Russian PC cafe chain.

On the first day of the event, 40 of the players will contend for eight spots in best-of-three (Bo3) series, in a Swiss tournament format.

Together with the other eight attendees, who'll skip the previous stage, the 16 will be manually seeded into four groups of four players.

The second day will begin with the round-robin Bo3 series within each group. Then, the two top players from the groups will advance into a single-elimination playoff bracket.

Within the bracket: the quarterfinals, the semifinals, and the third-place-decider match will be played in Bo5 series; the grand final will be a Bo7 contest.

The total prize pool for the event equates to roughly $5000 and has the potential to grow larger as Russian viewers can contribute via Twitch's donation alerts.

The initial plan was for the tournament to happen in July. Unspecified delays lead to re-scheduling for August 27-28, a week after the 2022 Quake World Championship, held in Bucharest, Romania, which will serve as the conclusion to Quake Pro League's third season

Romanov says international players “from any country” are welcome and RESP has arranged a hostel at a heavy discount and free catering for all attendees. He's hopeful at least some of the players who'll attend the QWC will use the opportunity to swing by, despite realizing a lot of them will face visa issues.

Traditionally, Bucharest's relative proximity to Saint Petersburg may have been a boon to the event; an opportunity for some of the top overseas players, or even Western Europeans, to attend RESP at reduced costs as part of a mini-tour of sorts. The prize pools and the viewership in Quake Champions are significantly lower than in more popular esports, like CS:GO. Thus, traveling expenses and prize pools are a heavy consideration for independent players and organizations alike. The further away the tournament, the bigger the prize pool needs to be to attract top competition.

Russia's ongoing war efforts in Ukraine have skewed this dynamic further against the RESP OPEN.

Only six months ago, Natus Vincere's Xron -- a Ukrainian and one of the top Quake Challengers players -- would've likely gone home after the QWC; then, a few days later, he'd have taken a short economy-class flight to Saint Petersburg to participate in RESP OPEN. Now, even thinking about attending an event in Russia is absurd.

For its part, Na`Vi likely wouldn't want anything to do with the event. The Ukraine-based organization used to have longstanding ties to Russia and Russian players; the vast majority of those relationships were severed shortly after the Russian invasion. Na`Vi broke off cooperation with ESforce Holding and cut away sponsorships. It even removed from its rosters players who pay taxes to the Russian Federation. They've also organized relief campaigns and filmed a documentary, highlighting the struggles of refugees.

While Xron is the sole Ukrainian attending the QWC, many more won't be making the trip from Bucharest to Saint Petersburg. Shane "rapha" Hendrixson, often named the greatest Quake player of all time, is one of them. Marcus "Strongsage" Macias, an 18-year-old Challenger from the U.S. and regular practice partner for rapha, simply "doesn't want to travel to Russia" in the current situation. 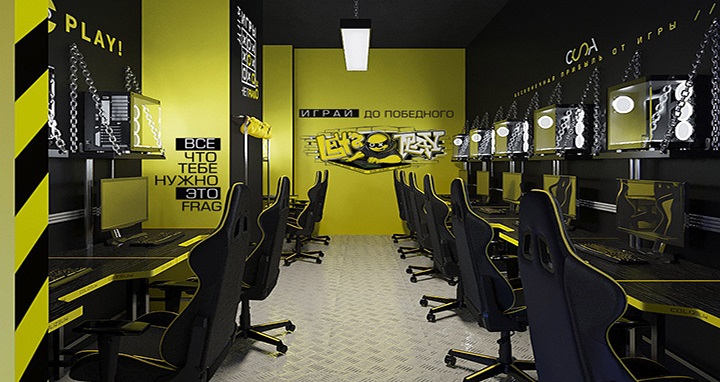 It's hard to blame him when WNBA star Brittney Griner has been incarcerated in Russia for over 150 days and the proposed swap, for a potential exchange of prisoners, from the Kremlin is for Viktor Bout, an arms dealer on whom was based the movie "Lord of War".

Maximiliano "maxter" Gonzalez, Sebastian "Spart1e" Siira, and Filipe "nosfa" Barbosa -- respectively, the #9, #10, and #12 ranked players in QPL -- aren't necessarily concerned with the safety of traveling to Russia; nonetheless, they're unlikely to attend the event.

BIG's Marcel "k1llsen" Paul, a Quake legend in his own right and the #1 ranked player in QPL, cited a need for rest and time with his family after the long season. Similarly, Myztro's Marco "VENGEUR" Ragusa and David "ZenAku" Addati, respectively #3 and #6 in QPL, have booked plans they can't reschedule.

Those are compelling reasons to skip an event outside the EU that was announced only a month in advance. However, one also wonders whether the war and their teams' public support for Ukraine is related to the decision to skip an event in Russia. Myztro won't send any of their four players who'll be at the QWC, but Nigel "APEX" Jones, founder and CEO, stated for Esports Heaven that the two are "not at all" related.

From among the QWC 2022 attendees who responded to Esports Heaven, only a small number showed a degree of interest in playing at the RESP OPEN, one of the few LAN competitions on the Quake Champions calendar. Even then, Russia's restrictive visa policies could easily prevent them from attending and add another layer to the "Esports Iron Curtain" Richard Lewis has been reporting on.

Nikola "serious" Gojic and Zhambyl "prox1mo" Kaliyev are the two QWC participants who've stated they're interested in attending and won't experience visa difficulties due to their nationalities. For prox1mo in particular, the biggest concern is travel as he doesn't have a sponsor who could cover the travel costs.

Quake veteran Alexander "BaSe" Rybin will attend the LAN, but he's “50/50” undecided about whether it will be to play or only to commentate on the games. Despite being a top-ten player for years, his practices have been increasingly scarce since the exclusion from the QPL. Already 32, which is almost ancient by esports standards, he likely sees the writing on the curtain and may be more interested in the assembly of friends than he is in scratching a competitive itch.

AGENT, the winningest Diabotical player in the world and a Quake veteran, says he isn't interested unless he's paid for participating, as the players were for the UFC-like event in May. He adds that he lost interest in Quake Champions as an esport four years ago.

cYpheR, the other player who's most often named the greatest Quaker ever, is set to attend the RESP OPEN. As one of the best players before the suspension, having finished 4th, 2nd, and 5th in QPL’s stages last year, he is the favorite to win the event. This time, in Saint Petersburg, he won't be competing against rapha, a rival he's dueled many times across 15 years and a handful of Quake versions.

32 himself, cYpheR still seeks the competition. He streams practices regularly on Twitch. The donations from fans will help fund an upcoming trip to Kauchicon, an Australian event he was invited to. Despite his stature as a living legend, Western esports organizations won't engage in the negative PR and legal complications of supporting a Belarusian, at least not in a game as small as Quake Champions. So, he has to cover the costs of traveling to tournaments himself, with the help of fans.

Due to COVID, someone making the trip from Bucharest to Saint Petersburg may be cYpheR's first chance to frag top international pros on LAN since before the pandemic, back when he was representing Na`Vi. As a result of the ongoing war, Kauchicon might be his last in a long while.

When Quake Live -- a 2008 release conceived as a browser-based remake of 1999's Quake III Arena -- was nigh-abandoned by the developer and the publisher in the mid-teens, 125FPS kept the competitive aspect alive. Xron, as an admin, was among the people who helped run the weekly online cup. Ukrainians and Russians, together with participants from other nations, were united in maintaining a semblance of Quake competition alive. The love for the game is still there now, but our current reality makes similar efforts impossible in the foreseeable future.

Earlier this year in Katowice, Na`Vi's Oleksandr "s1mple" Kostyliev made a compelling statement of kinship and unity between people, regarding the then-fresh conflict.

The unceasing violence has made it increasingly hard for the world of esports to continue echoing it.

Russian players have often received social-media judgment for the actions of a their government, something they can't be held responsible for. Even the players who've remained on the Western side of the Esports Iron Curtain have had their lives uprooted, as they've had to relocate. This is something the economics of Quake simply do not allow and, as a result, the scene is more split than ever.

In regards to the war, Xron told me he doesn't think any more statements are necessary at this point.

It's hard to disagree. All the proclamations, regardless of whether they ring hollow, have not been enough to convince the Russian leadership to withdraw. Along with Belarus' government, it has gone as far as imprisoning its own citizens who protest the war. This has put athletes from the two countries between a rock and a hard place, as milder appeals for peace have incited a barrage of scrutiny among international fans.

In this context, Romanov's statement that RESP "allow all players from any country" indicates that he hopes to maintain the spirit of 125FPS, despite the practical impossibility of the idea.

Players who'd like to sign up to the tournament can do so with the following forms in English and Russian. For additional details and question, Yuri "Frozen" Romanov is available on Discord at “YouraTheGuide#1405”.

If you enjoyed the article, or found it interesting, the best way to show appreciation for it and support future content is by sharing it with others and following us on twitter at @EsportsHeaven and @RNach_. Thanks for reading!