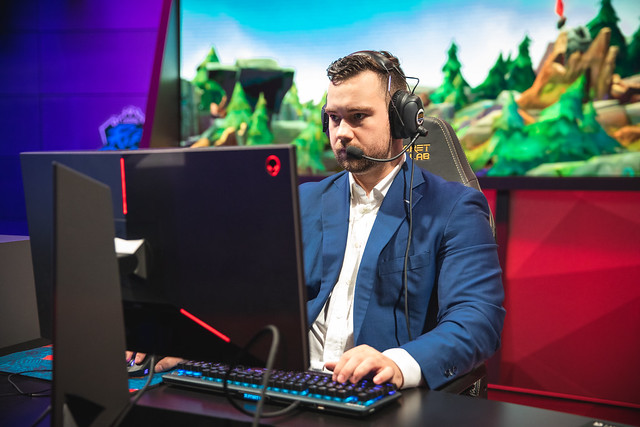 FNC Youngbuck on player champion pools: “If a player comes to me and says ‘I can only play three champions’, then I won’t hire him”

Izento 2019-06-30 04:36:26
Youngbuck has been in the LoL scene since Season 1, and most notably he was a part of the Copenhagen Wolves in the EU LCS in Season 3 as their top laner. Currently he is the coach for Fnatic, but he got to relive those days as a player as he played in the show match at Rift Rivals against his NA counterparts during day 1. Esports Heaven got to speak with him about playing against Dyrus, playing solo queue, playing on Copenhagen Wolves with Forg1ven, coaching Rekkles as a veteran player, EU’s flexibility in roles and champions, and building up players like Bwipo and Nemesis.

You played against Dyrus in the show match. How was that?

I think it was the same as it was 6 or 7 years ago where I would just get smashed. When I heard he was playing top and not Westrice, I got really worried (laughs) because I thought I was going to play Westrice, but then it was like, shit I have to play against Dyrus.

Some of the broadcast was saying that you were Challenger or somewhere about there. Do you play a lot?

No no, I rarely play and I’m D4 in EUW right now and I’m hard stuck because I’m not good enough to get out of D4 (laughs).

What are your thoughts on coaches playing? Do you think they need to play towards kind of a high level?

I don’t think you need to currently be playing if you’re a coach, even though it can help to understand the current meta or what’s going on in solo queue. It does help if you have a history of being a pro player because I feel like you get a better connection with your players, you know what they’re going through when they’re on the stage, what kind of emotions they’re going through when they win or lose. So, with emotion management, it helps to be a former pro.

Did this take you back to your Copenhagen Wolves days?

(laughs) Yeah it did bring me back a little bit, the same old play Renekton and run it down, int a lot, feed a lot and then lose the game eventually.

Speaking about that team, going way back, I was looking at the roster that you guys had and it was actually pretty insane. You had Amazing, Forg1ven, Unlimited. Forg1ven in particular, how was it playing with a player like that and then coaching a player like Rekkles? What huge differences do you see between these two characters?

Playing with Forg1ven was a very interesting thing to do because he’s extremely outspoken and aggressive, but that’s also a good thing, it’s not like he’s always flaming someone. So, that experience was really interesting. Then, coaching Rekkles, I would say he’s more passive in his communication, where if something is bothering him he’s not going to be the first one to bring it up or he won’t be very direct about it, so that’s the biggest difference between the two of them. If Forg1ven doesn’t like something, he will flame whoever is inting him or whoever he’s pissed off at, whereas Rekkles will take a relaxed approach at it and hope that people figure it out by looking at his eyes.

Rekkles is a big veteran for the team. How much do you value a player that can be a veteran or leader for the team? I feel like a coach can’t control every single aspect when it comes to tutoring a player, so how important is Rekkles for leadership in a team like Fnatic?

I think for the players, they know that they can rely on Rekkles during every single match. If the coach comes and says, “top lane, you have to play a really bad matchup because it’s going to be good for Rekkles”, they know he will get the job done. People have a lot of confidence in him and that raises their own confidence, so I think that’s a really great asset to have in someone like Rekkles. I do think that every team should have a bit of a mixture of veterans and rookies because the veteran is still hungry and towing the rookie forward.

EU seems really flexible with champions and roles, with Yasuo being flexed to three different lanes, but in NA it doesn’t seem like we’re on par with that amount of flexibility. What’s your opinion the flexibility of NA and EU? Do you think it gives EU a significant advantage currently?

Yeah, it definitely gives EU an advantage, but I would also say that it’s mostly G2 and a little bit of Origen, as we as Fnatic are way more rigid. When we swap it’s more like we’re swapping top and mid, it’s not that suddenly our jungler is playing bot lane. We’re not at the level, for example, where suddenly Jankos is suddenly playing support. I think G2 has an extremely large champion pool and they’re willing to swap more than other teams. I think it comes with player quality and also being really open-minded because a lot of players, for example if you’re a mid laner, it’s really difficult to swap to a different position like ADC, but also wanting to do that. If you’re a mid laner, you’re in a very powerful role and you control the game, and if your ADC asks, “hey, can I go mid”? It’s usually pretty tough.

How is it building up players like Bwipo or Nemesis? You’re known for building up teams and players, like G2 for instance with Perkz, whose now legendary in his own right. In this meta you have to master some flex picks and maybe flex to a different role, so how is it developing a new player? Often times newer players only have a small champion pool or maybe they were a one-trick, so how is it from your perspective as a coach?

I think it starts with the scouting. Bwipo for example, I’ve always thought he has a really large champion pool, and I think we kind of struck lightning in a bottle twice where Nemesis wants to play every champion in the game, he wants to be ahead of the meta and every single week he tries to find new picks.I think it’s about the personalities and it’s not so much the coach. If a player comes to me and says “I can only play three champions”, then I won’t hire him. That was the situation we had at the start of the year where I had to choose a mid laner and Nemesis was telling me he would play every champion in the game. Even when I was asking other people about him they were like, “yeah, he will actually play every champion in the game”. The other choice I could have gone for was Lider and I was told he was really good on assassins but anything other than that would be tough. So, in the selection process we went with Nemesis because he’s way more flexible.

That becomes more difficult as you don’t know how the meta is going to turn out.

Yeah, and playing for Fnatic, you pretty much know you’re going to be playing through bot lane (laughs) for most of the games, or playing something like Caps was playing like Irelia and Sejuani combos. You want to have those in your arsenal because you don’t really look as much at the assassins like Leblanc or Akali because they aren’t that important for us. ___ Izento has been a writer for the LoL scene since Season 7, and has been playing the game since Season 1. Follow him on Twitter at @ggIzento for more League content. Images courtesy of LoL Esports For more LoL content, check out our LoL section