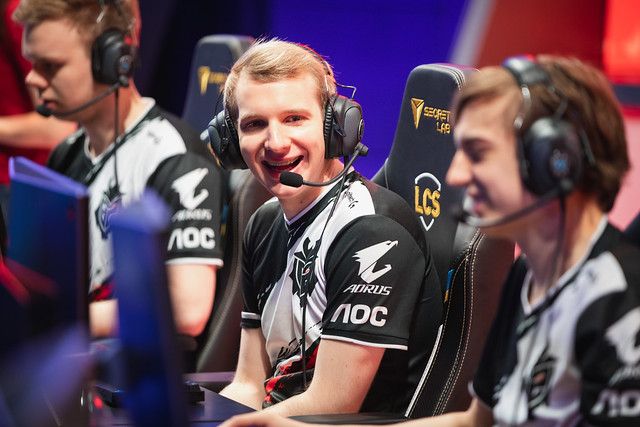 G2 Jankos on lack of NA side laning: “…just because people in solo queue aren’t playing well (at side laning) doesn’t mean pro players have to play like shit as well”

Izento 2019-06-30 04:17:46
Rift Rivals during day 2 saw G2 face against TSM with Jankos playing Pyke in the jungle and ending the game rather quickly. Earlier in the day G2 also faced against Team Liquid with a very unorthodox composition of Shyvana top, Zed and Yuumi bot. Esports Heaven spoke with Jankos about his thoughts on TSM, NAram, NA side laning, catch up EXP, G2’s ability to play multiple champions or roles, practicing niche picks, and comparing him to Peanut.

What do you think of TSM and how they performed?

I think TSM can play a fine game but I don’t think they are anything special, they are kind of like all the other NA teams. Normally during the mid game they fall behind and are just kind of clueless, they go mid and don’t do anything. So, I don’t think it’s very hard to play against that team.

Do you think there’s some truth to the NAram region? Do you think that’s a worthy description in that we’re a heavy teamfight region?

I don’t think NA is a heavy teamfight region because for example in LPL they fight a lot, but for no reason. They just pick fights, let’s say they go for drake and everyone dies, then they just group up again and nonstop fight. In NA, I think it’s kind of weird because they just group mid. It feels like they don’t know if they should go side lane, or if they do, do they win? Or should they sit in jungle or how do they get priority? For me, it seems like at some point they’ll group mid and all you have to do is push sides and even if they get a kill because we’re trolling, we’ll still get more than them.

I don’t think so. I mean, for sure it’s dependent on the solo lanes and how they play the side lanes and unless you’re playing something like Zed and Yuumi in the side lane such as we did this game. It would help if NA knew how to side lane by playing it in solo queue but I don’t think it impacts the teams, it’s really irrelevant because in EU, sure maybe more people know how to play side lanes in solo queue but just because people in solo queue aren’t playing well doesn’t mean pro players have to play like shit as well.

You ganked a ton this game and didn’t really farm during the beginning parts of the game. This reminds me of catch up EXP and how some have an issue with this mechanic. Do you think there’s any truth to the idea that ganking has very little consequences because of this mechanic?

I don’t think it’s true. If the enemy jungle gets Pyke and you farm slow and you gank a lot, sure if you get kills you won’t fall behind but that’s not because of catch up EXP, that’s just because you got kills. If Grig would have farmed more that game and my ganks would have failed, I would have been super far behind. I don’t think catch up EXP is relevant as it was before, but then it was hard nerfed and now it’s actually really hard to stay even in level with your solo laners and if they take your camps, especially in competitive play where everyone wants farm to carry, and my jungle is maybe not a tank or low income jungler, then you will fall even more behind in levels. I do believe that right now, I’m not sure if I would buff the jungle, but I wouldn’t nerf it either. Like I mentioned, if Grig would have had successful ganks and farmed better, he would have been much more ahead.

How is it playing in a team that can basically play any style that you want or any champions at almost any position? It seems like a really unique experience that isn’t easily replicated in other teams around the world.

We are all really open-minded and that’s why we try a lot of picks, so it’s not even about us having fun, it’s more about us trying picks and trying to figure out what’s the best way to play the game. Since we are all open-minded, we like to learn from mistakes, we like to learn when we lose. We try stuff and if it works then we can use it on-stage, if it doesn't, then we won’t use it. Obviously at Rift Rivals it’s not a super serious tournament so we can allow ourselves to try more things, but overall it’s important to stay open-minded. If you’re a team that isn’t as mechanically gifted as players such as my solo laners or just the members of my team, and you are struggling already then you will not be as open-minded because you need to study the basics in order to win games. Sometimes a pocket-pick can help you because you can catch someone off-guard and that can get you a win.

Speaking of that, what do you think about teams practicing these eccentric picks? It takes time in order to even study those picks and maybe you could spend more time studying more fundamental things. What’s your theory on taking away time doing different picks versus studying the basics?

I think how LoL works as a game right now is that you have your team practice and you play as five, then you review it. I think this is the correct time to practice the basics and pick the champions you already know and focus on how you can improve as a team. I think solo queue is the perfect time to practice different things, and sure if it works in solo queue it doesn’t mean it will work in competitive. If you have a good scrim day or you agree that every 5th or 6th game you will try a new champion and everyone has to tryhard because we’re trying a new champion, and if we see how it plays and if it’s good or not, that’s a healthy way of trying out new champions. Of course it’s not about playing a new champion six games in a row and you’re only playing that champion and maybe the games could look different or maybe the champion isn’t good, but allowing even one game per day to try something new could be good for the team. For example, you could have a rule where you don’t try more than one new pick because that could ruin the game obviously since a lot of people are playing new picks like when we played against Team Liquid, we had Evelynn, Zed, Yuumi and Shyvana top (laughs). In that kind of game it would be kind of useless but, if say we played a normal draft with Shyvana top, we could actually see how strong Shyvana might be.

I’ve always thought of you as a Peanut of EU when it comes to jungling (laughs). Also with all the videos and things with the personality you exude. What do you think of this, being considered as this really aggressive jungler? Do you think that’s even true now? I know back in the day that’s what it used to be, but do you think that still holds true that you’re this jungler akin to Peanut?

(laughs) I mean, I wish I would be, I still try to play as aggressive as I can but I think most of the time my laners are picking either scaling matchups or matchups that don’t allow me to permanently invade, but if I do have a good matchup and if I see my laners doing well, I will 100% be in the enemy jungle. I think that’s the correct way to play the game, that if you can choke them out and they can’t breathe, then everything collapses. In some hard games like Bo5s, such as against SKT, I have to be a control-style jungler because we aren’t winning every lane. Against worse teams it’s kind of easy to play as a jungler because if all of your lanes are winning you don’t really need to do anything, you can just gank a lane and it will probably work out, but against the good teams that are even with your own, you have to figure out what to do in the game. But yeah, I wouldn’t mind being the Peanut of EU (laughs), I like Peanut. Right now, out of all the Korean players I like Clid the most, I think he’s really good and he’s really clean and it was fun playing against him at MSI. I also heard that Tarzan is super insane so I look forward to playing against him. ___ Izento has been a writer for the LoL scene since Season 7, and has been playing the game since Season 1. Follow him on Twitter at @ggIzento for more League content. Images courtesy of LoL Esports For more LoL content, check out our LoL section