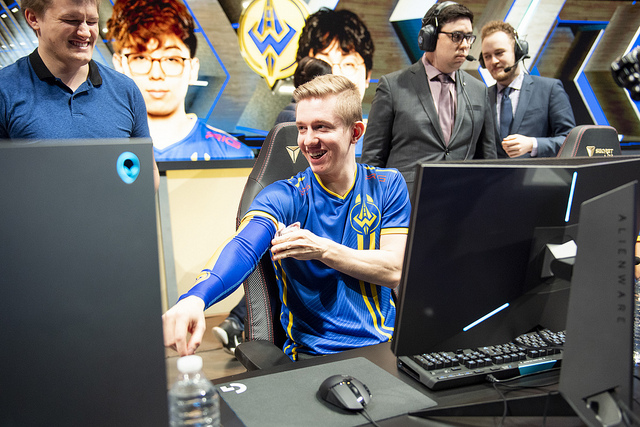 GGS Froggen about Crown: “I still see him more as a Malzahar player rather than a Viktor player. I know he’s known for playing Viktor because of 2016, but I’m fairly confident I’m the better Viktor”

Izento 2019-02-26 05:43:28
Golden Guardians have slowly started digging themselves out of a hole as they’ve gone 1-1 during Week 5 on the LCS, a long journey from losing multiple games in a row. GGS mid laner Froggen spoke with Esports Heaven about their win against Echo Fox, Viktor in the meta, positional rankings is solo queue and resetting the solo queue ladder.

You guys just defeated FOX with Viktor. Why the Viktor pick? What makes him viable currently?

I think there are a lot of mid champions that are viable. I’ve played 10 games of LCS and 8 different champions. There’s many champions where I’m like, damn this is pretty good, or this works in this scenario. I think especially on red side you can open up depending on what the enemy team is picking. There are so many mid laners that only play 3 or 4 different champions that you kind of know what they’re going to play depending on their composition, and that just opens up a lot of picks to play against them. Viktor and Corki was a popular matchup in 2017 when I was playing. It’s not like it’s unplayable for Corki but Viktor will have pressure in lane and we had a lot of cc from Kalista, Alistar, Lee Sin and Urgot with his AOE fear. We had a lot of cc so I didn’t need to go for something like a Lissandra which also would have worked in this setup. This pick is something that I’m confident in.

Do you think these types of picks, Anivia and Viktor, in that they have superior wave clear to a lot of other champions, that this is a crutch for dictating the game state and how you want to play through mid? It seems like a lot of NA teams just want to get mid priority to control the waves and Baron. So, is this more of a reason to pick wave clear champions nowadays?

I think every mid champion needs to have wave clear for sure. I don’t think there’s a mid champion played that doesn’t really have wave clear. I think a lot of the time you need it or you need something that has some kind of pressure that can counter the team to some extent. In mid game you often see bot lanes go mid anyways, so if you want to play a split push style you definitely can do that, which is also part of why I did the Viktor pick because I think it can match Corki anytime in the game and it has a strong laning phase. So, when we start going to the side lanes, I’m still strong against him. Compared to, lets say Syndra, you have a pretty decent laning phase against Corki, he can’t do anything to you, and it just has to be farm versus farm. When you go to the side lanes, Corki has more pressure because he has the dash and Syndra is squishy and immobile, so she has a chance of getting one-shot by Corki once he has Trinity Force. It just really depends on the situation but every mid champion has wave clear right now.

Between you and Crown, who has the better Viktor?

I’ve played against Crown a decent amount. I still see him more as a Malzahar player rather than a Viktor player. I know he’s known for playing Viktor because of 2016, but I’m fairly confident I’m the better Viktor. I’ve basically been a one-trick Viktor a lot of the time on Echo Fox. I really enjoy that champion actually.

What are your thoughts on when you killed J4 in that top lane tri bush?

At first I was like, it’s kind of suspicious he’s not moving, but I did the krugs just before that and I had my empowered auto attack ready, so when I placed my pink ward, it was just like, “oh, there’s a J4, I guess I’ll just attack him and see what happens because he is squishy, so he’s kind of gonna get one-shot”. So I kind of go at him and use my ‘E’ and auto-attack and he’s still not moving so (laughs) I drop my ultimate and then he starts moving and I get the last hit with my ‘Q’ and I’m like, “ok, I guess that just happened” (laughs). I guess he wasn’t looking or something. That was really weird. I don’t have any big thoughts about it, I just thought it was odd.

So, towards the end of the game, you kind of got top inhibitor for free while Echo Fox decided to get Infernal drake. Do you think that was a lesser of two evils play from FOX? What do you think was their mindset?

I don’t think them going for dragon was a bad idea on their end and it’s something we definitely could have contested if we wanted, we just really wanted to use our Baron and try to open up the game, especially since we know Ezreal and Corki are really strong late game and they have a tank to frontline for them. It’s not like we scale bad but it’s just that their scaling is kind of insane and very straightforward to play, so it might have been difficult for us if we ended up going into a game where everyone has full items. I just kept on pushing and we tried to play three lanes and FOX weren’t really showing anything so they were sitting and waiting for dragon and that’s kind of their choice. We could have played it better with the rest of the Baron after they got dragon. I think we definitely could have played more aggressive because I was able to one-shot everyone so if we’re on the same page, if the enemy walks up then they’re just going to die. I think we would have been able to get the mid inhibitor, so it’s definitely something we need to work on with how fast we should end the game because the towers kind of die in three hits, so it’s just about getting those in. We could blow all of our ults to make that happen.

What are your thoughts on the positional rankings in solo queue?

I don’t really have much thought about it because it doesn’t really matter much for us in Masters and above because positions disappear after you get into that tier. I think the big issue in that ranking is that the matchmaking is really really bad right now and it matches D5 with Challengers sometimes and it’s just like, why is this happening? It’s just really one-sided games. Then everyone is angry at each other and the people that just climbed there are like, “yeah, I’m the best player in the world” and the rest of us are sitting there like, “damn, what’s going on in their head”? Like, they’re so bad but they’re talking so much (laughs). That’s the struggle of it. I’m looking at them and watching them type like, this is kind of funny.

In your opinion do you think the ladder needs to be reset?

I don’t have too much opinion on the solo queue. When we practice, we go from like 11 AM and we’re done at like 8 or 9 PM. So it’s like, our entire day is gone. There’s not really anything to do for the rest of the day so maybe you can play one or two games. So, maybe having a hard floor for LCS players is probably a good idea so that you don’t have to spend 50 games climbing through players that are not on our level and aren’t good practice. I think if you’re in LCS you would be expected to get into Challenger anyways or Masters plus or whatever. Having some kind of floor where you can’t drop below it at a certain point would be pretty good for us. I think they do it in other things, like they do it in chess where you can’t drop below a certain threshold because you’re expected to be good when you’re a grandmaster. So I think something like that could work in LoL too, but I don’t know, maybe people would have conflicts with it but I hate going through 40-50 games and just being like, this isn’t even practice, especially since I need to get through these games to get to practice. It’s kind of like when you make a new account and getting it to level 30, it’s like, what the hell? Especially during the season it doesn’t feel good to use a lot of games to get to the point to where it’s like, “ok, now I can practice some stuff”. ___ Izento has been a writer for the LoL scene since Season 7, and has been playing the game since Season 1. Follow him on Twitter at @ggIzento for more League content. Image courtesy of LoL Esports Flickr