KillerPigeon: “I guess you could say esports saved me: I was in a pretty down place and knew I didn’t want to continue as a software dev”

KarY 2018-09-01 05:18:31
KillerPigeon, also known as, Darren Elmy is one of those new entrants into the casting scene who aspires to become a well established caster in Dota 2. When I first begin my conversation with him, I immediately realize that he's humble and has a good sense of humour, and that's precisely the reason why the community has welcomed him with open arms. In this interview, we focus on KillerPigeon's journey into the casting scene that started only eight months ago, his sudden breakout into the scene that took everyone by surprise -- in a good way, his profound respect for Trent, AnneeDroid as well as Blitz and how they've helped him in growing as a caster, his visit to TI8 as a spectator as well as his future plans amidst other things like his advice to new casters making it into the scene and much more. Hey Darren. Let's start by introducing yourself to the community. Kindly do the honours. Hi there, I'm Darren Elmy: better known as "KillerPigeon". I'm a play by play caster in the wonderful world of esports and specifically Dota 2. I live in the UK born and raised and I've been involved in the casting scene now for about 8 months. Before that I had a career in software dev. What made you transition from being a software dev to casting? Take us through your journey in between these two worlds. I graduated from university in 2015 with a BA in Computer Games Design, from there I eventually found myself falling into a blue chip company working with Microsoft products in a 2 year contract. As time went on I found myself growing kinda miserable actually. I began to realize that while I loved creating things, my true inspiration was inspiring and entertaining people: hence why Game Design had rung so true with me originally. It's why I started variety streaming about 8 months into that job and it wasn't until the start of 2018 that I realized I might just have a knack for esports casting. I guess you could say esports saved me: I was in a pretty down place and knew I didn't want to continue software dev. Then in an unexpected moment an amazing opportunity presents itself. What unexpected moment are you talking about? That unexpected moment was Epicenter, they ran a contest for upcoming casters and I got recognition in no small part thanks to the community but also especially thanks to Trent and AnneeDroid that acted as advocates. I guess you could say they kinda put an official "you should listen to this guy" stamp on me: validating what fans were saying in Reddit threads, listening to the casts and even having Trent jump on with me for my first duo-cast. I've still yet to hop on the mic with Trent again but hope to soon as it was pretty awesome and he opened my eyes to why duo casts are always better than solo casts! Then the real deal sealer: the part that made me realize "OMG, you could potentially do this" was when I checked my emails towards the end of the Epicenter closed qualifiers. There sitting as clear as day was an email asking me if I wanted to go to DreamLeague and be part of their talent lineup! Immediately I answered "Hell yes", followed by a bunch of newbie lan questions and several dozen "I've never flown before, HELP!" questions: big thanks to Matt for showing patience with that.

Please continue, don't let me stop you from going further. Tell us about DreamLeague as well : ) So there I was, a new guy to the casting scene flying out to my first DPC lan just a few months after beginning this journey. It was all surreal: one moment I'm sitting at my desk at home receiving a bunch of praise, next thing I know I'm being flown out to one of the most loved events in the Dota scene! In all honesty? The experience was inspiring and amazing, everyone was helpful and understanding: from the talent, to production, even some players and managers. I walked away realizing that I hadn't made "contacts" or "networking tools", I'd made a series of friends. It's why when anyone asks me I usually refer to DL as my Swedish family.   That's really amazing. You're one of the very few that's exploded onto the scene by being relatively new just like ODPixel did. What is it with you British people (hey Kaci!!!) being recognized so easy? (laughs) In all honesty, to what would you attribute this sudden boom/fame as compared to other newcomers who're struggling to make it in this industry? I guess people watched one too many Bond movies and got entranced? :P. I think it's kinda crazy, I've had this discussion with a few people and most agree there's a grind to it before you get your break: some people will view my grind as short, others will maybe complain I skipped it. I hear a lot of people go "you got lucky" and sure: I got lucky. But I think it's more about what you do to enable being lucky. The more times you put yourself in a position to get lucky, and the more times you prepare yourself for it: the more likely you'll be able to seize that "lucky opportunity" when it arrives. And I think people kind of have this misconception that I've "made it", I still think I've got a long way to go on this journey. I feel my casting is improving with every game I cast and that's because I'm aiming to criticize myself all the time, but also because I look to have fun with my job. At the same time there's still plenty of tournaments I've not made contact with yet that I'd love to. I interviewed Capitalist a couple months back and his piece of advice to other aspirants was that casters should try other games as Dota 2 has already reached its peak. What's your take? I don't think Cap is wrong, but it's a broad statement. I feel there can still be exceptions but I'd never encourage someone to pin their livelihood on it. Dota has such a huge pool of talented casters, it's a mixture of luck and uniqueness to get through now. If I was to look at my casting career from a strictly objective point: I'd be CRAZY to pin it all on Dota. The reason I do is because I love the game so much, and I love the people in this space so much as well. "Making it" in the world of Dota 2 now isn't just about a grind, it's about the situation, timing and probably a ton of other variables that aren't that clear. The story of how I make it through this esports world is relevant to me, but there might be 1 piece in 100 of the story that's relevant to someone else. I think the scary part for people is when they start thinking about it like a regular career: where you work as the assistant for 4 years then become the manager etc etc. Dota and in fact usually esports just isn't that. It's "esports" .. or Redeye will get to you. Do you not fear his rage? (sic). Anyway, you casted TI8 qualifiers and even attended TI8 as a spectator. Tell us about this whole experience. I mean I'm expecting a targeted rant by him after this is published :P. It was an amazing privilege to be involved in the qualifiers as a caster, my whole approach through this year is never expect anything: that way when I get something it feels 10 times more amazing and you learn to never take things for granted. From DL, to ESL qualifiers (and even appearing on the main events stream), to Epicenter and TI qualifiers: I've been overwhelmed and amazed at every turn. Then to go to TI8: even as a spectator, it's a magical experience. You meet so many people you've known online but never seen, you're almost guaranteed to run into all your friends. The atmosphere was mind-blowing and even if I strip away the fact this was my first TI: I think it would be fair to say this has been the best TI we've ever seen. From a logical business point though I wouldn't advise most people to not anticipate what they will have to cast or won't in the future. It feels amazing but is also very risky. 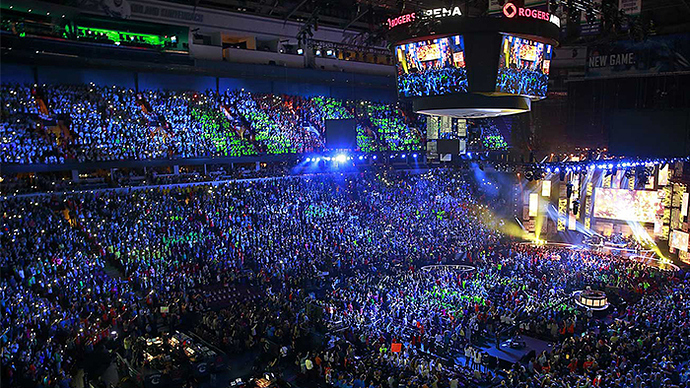