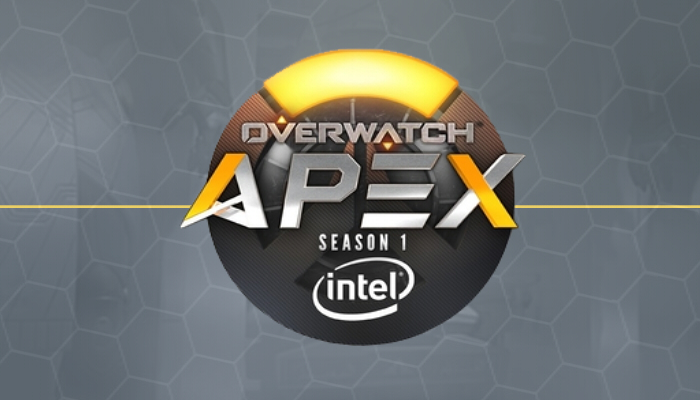 Dear fan of the future,

I am unsure who is dominating the Overwatch esports ecosystem when you read this, or who is quickly climbing the rungs of the competitive ladder, but I write to you today about a team or organization that is long past your time. Something that is timeless in their story and their purpose. Something that unrelentingly dared you to challenge your perception of the current landscape of Overwatch and had the courage to chase their dreams. These are my letters from the past to help educate people on where the community has come from and to act as a Rolodex of info on just who these teams were so that their legacy might continue to live on through you; the reader.

I write to you today about a topic more broad than just a simple story of a team, or a player. This was something that bridged the gap for many competitive Overwatch players looking for something greater than the competitive ladder. Something I personally look back fondly on, the  South Korean tournament series; OGN's Overwatch APEX league.

Following the success of the first international tournament, APAC Premier 2016, OnGameNet (OGN) was set to debut its long-awaited multi-season Overwatch tournament league. To set the landscape for you, for example - Envyus was still considered to be the kings of the west and Rogue were their rivals. Not much had been seen from Asian in terms of competition. Every so often, you would hear about an online tournament or a name would pop up in a highlight somewhere, but nothing really concrete. APAC 2016 filled that niche. Fate would have the original Rogue lineup defeating Lunatic-Hai in the best of seven grand final. This was after Lunatic-Hai proved to have Rogue’s number as they lost to Lunatic-Hai twice in the group stage.

OGN’s stage was set and the music was prepared. It was time to take a gamble on a widely popular game and show it en masse. It was time to show to the world how far Overwatch could be taken. As speculation and worry about the future grew loud, the curtains slowly closed. The show was about to begin. The colors all began to fade away and the music we all would come to know and love would enter like a lion, proud and illustrious. The same music that still shoots daggers down my shoulder blades when I hear it. 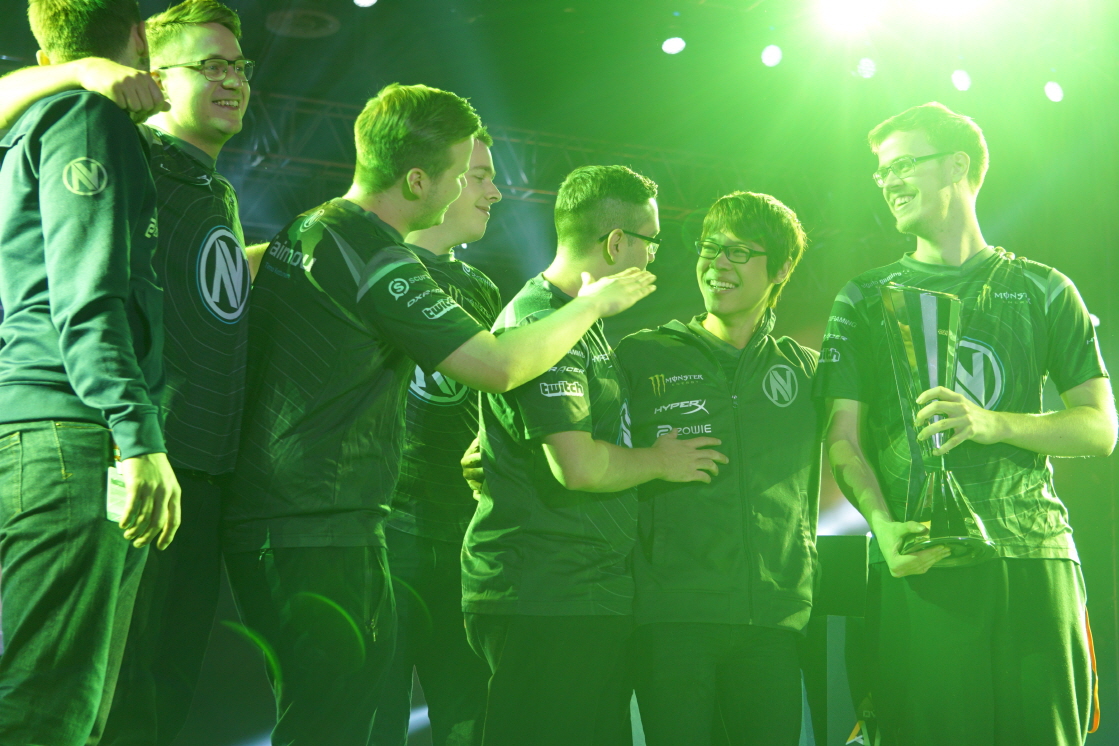 The pandemic of APEX quickly carved an enthusiastic swath in the Overwatch community. This would be the battleground of some of the biggest names in Overwatch at the time. It was the scraps of meat left on an empty haunch, but it was delicious. APEX was unveiled during a period of stillness in the Overwatch esports scene, and without it, we would not be where we are today. Funnily enough, the names that are synonymous with this tournament are still known today.

The first season was set to be the rematch between the South Korean natives, Lunatic-Hai and the reigning champions, Rogue. Both teams peaked at APAC 2016 and they were a clear step above the rest of the competition. Now they had a chance at a rematch. As Rogue was set as Western favorites, Team Envyus received an invite for their domestic dominance and overall skill level. Joining Rogue and Envyus as the western representatives would be NRG eSports and REUNITED, teams who, in their own right, played above and beyond expectations in their respective domestic regions. Playing contrast to that, I vividly remember not knowing how to judge any of the groups when they were announced because we just didn’t know any of these Korean teams. I and many Overwatch fans across the world would quickly correct that issue. It would be in this first season as well that we learned of the perennial bridesmaids; RunAway.

RunAway was a bit of an enigma in the beginning. This scrappy underdog team was not what we know of them today. Their birth during APEX Season 1 was anything but stellar. One noticeable feature of this team was their star Genji player, Haksal. Even if RunAway was one-dimensional in Season 1, there was some undeniable potential within this team. The second match day for Season 1 featured a match between RunAway and REUNITED. It would be this match that western fans would learn and fear the name “Haksal” as he systematically dismantled what was to be a top-tier European team. That said, RunAway did not manage greatness in their first season and would face relegation towards the end. Contrasting RunAway’s debut was a little team from the west dressed in blue.

Team Envyus were the kings of the west. Going on an insurmountable winning streak, achieving title after title, and housing some of the best players in the world, Envyus were fan favorites to make a splash in Korea. To the surprise of everyone, that is exactly what they did. Pongphop "Mickie" Rattanasangchod was recruited last minute as a stand-in to fill the absence of Ronnie "Talespin" DuPree. During a shift in the metagame and playing with an emergency stand-in, the playoff bracket for APEX Season 1 looked grim for Envyus. Somehow, someway, they manage to persevere and capture one of the largest titles ever won by a foreign team on South Korean soil. With their names in the history books, Envyus look to defend their title during season two, but there was one team that stood in their way.

After failing at APAC 2016, IEM Gyeonggi, and APEX Season 1 Lunatic-Hai were finished with the sour taste of failure. With two new members joining their ranks they looked towards season two for a chance to prove themselves worthy. Adding 15-year-old prodigy Seung-Joon "WhoRU" Lee and a former CONBOX T6 flex tank Joon-hyuk "zunba" Kim were strong additions to a promising roster. WhoRU and zunba stood with the legendary Lunatic-Hai clan to face APEX Season 2 not as individual players, but as a team. Lunatic-Hai managed to capture two consecutive APEX titles, in APEX Season 2 and 3. With grand final wins over rivals RunAway in season two and KongDoo Panthera in season three, their name traversed the lips of domestic and foreign fans alike. Lunatic-Hai were the top dogs for a long time. Their era was not of dominance, but sheer consistency and adaptation. That being said, Lunatic-Hai did not face their fair share of competition. 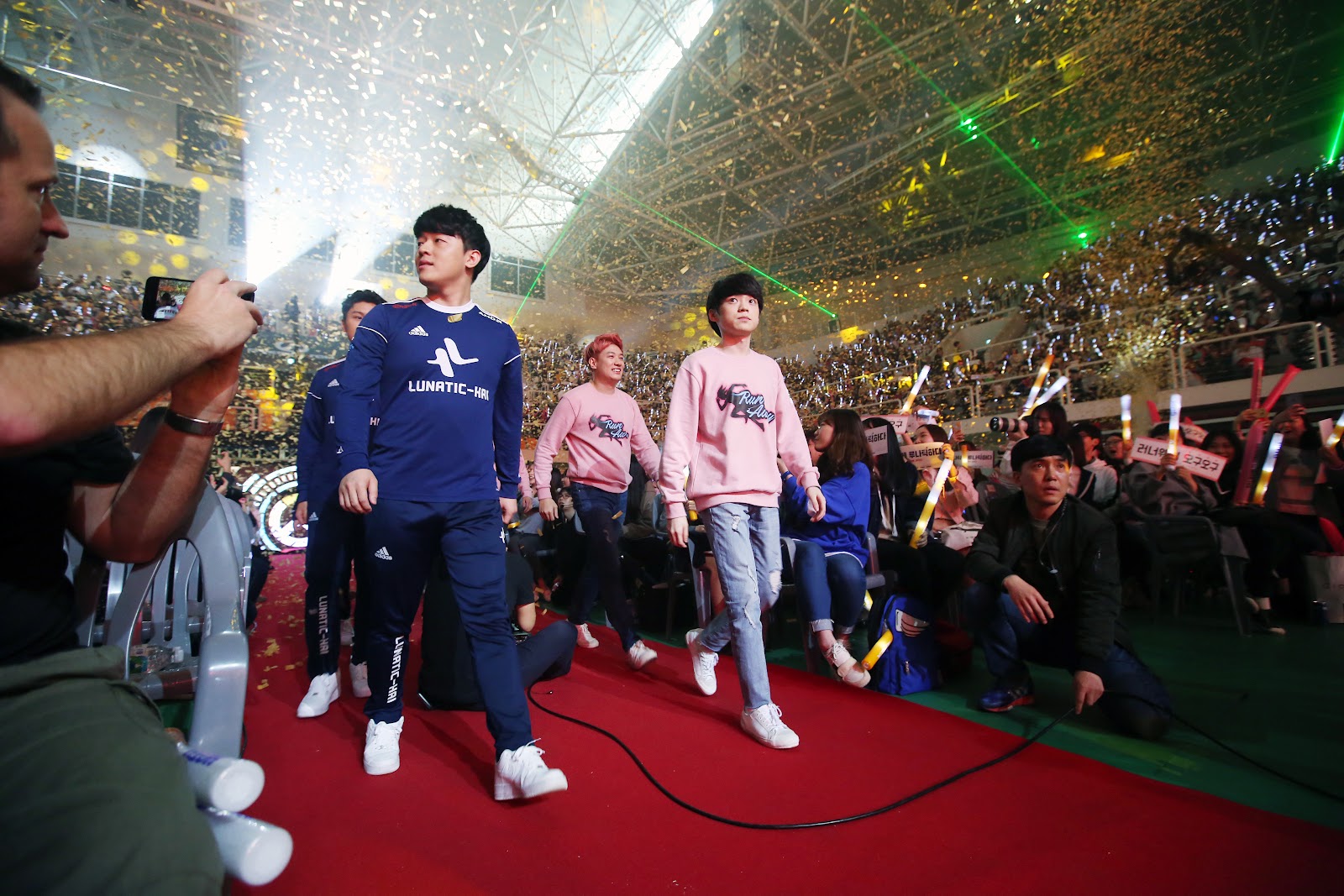 KongDoo Panthera was just one of the teams that grasped at the idea of an APEX title. Without the KongDoo organization, we would not have had the brilliance of Chan-hyung "Fissure" Baek or Dong-jun "Rascal" Kim. Their aggressive style was something that captivated fans but remained a bit too loose to consistently secure victories over their many rivals like LuxuryWatch Blue or Lunatic-Hai. Panthera’s best finish in APEX was a second-place finish that came at the hand of Lunatic-Hai in season two.

The royal roaders, GC Busan quietly entered OGN’s APEX League Season 4 as one of the top amateur teams. They were promising, but far from perfect. However, somewhere during the regular season, GC Busan underwent a metamorphosis of sorts. They went from being forgettable and nothing to write home to mom about, to being world-class, and not just world-class, but they were taking dominant matches against the reigning APEX champions, Lunatic-Hai. That wasn’t all though, the coasted right over Cloud 9 KongDoo and met RunAway in the finals. That day the veterans fell to the young upstarts. That day, the train from Busan roared into the station like a confident stallion. In a match that went the eternity of seven games, GC Busan took home what could possibly be the last APEX title we will ever see.

I speak for many others in the community and say we would not be where we are without the APEX league. It taught us what could be accomplished with this fantastic game. It brought us riveting storylines each week. More importantly, it gave us a brief glimpse of what exactly the future held for competitive Overwatch. For two years OGN and their APEX league brought us a cornucopia of entertainment, skill, and polish. As of the 21 of December, Sports Chosun broke the news that South Korea sports channel, MBC Plus Media, secured an exclusive deal to broadcast the amateur league replacing APEX, Contenders Korea, which spelled the sudden end to the OGN APEX league.

Much like in life, you must always remember where you came from and many people started following Overwatch from OGN’s APEX and the “APEX Era” of Overwatch. This is not a eulogy, rather a fond reminder of the past. A nod to the those who came before us, to shape the road to our future. With that being said, take some time to share some of your favorite APEX moments with a fellow fan today. Here is one of mine.

Joseph “Volamel” Franco has followed esports since the MLGs of 2006. He started out primarily following Starcraft 2, Halo 3, and Super Smash Bros. Melee. He has transitioned from viewer to journalist and writes freelance primarily about Overwatch and League of Legends. If you would like to know more or follow his thoughts on esports you can follow him at @Volamel.