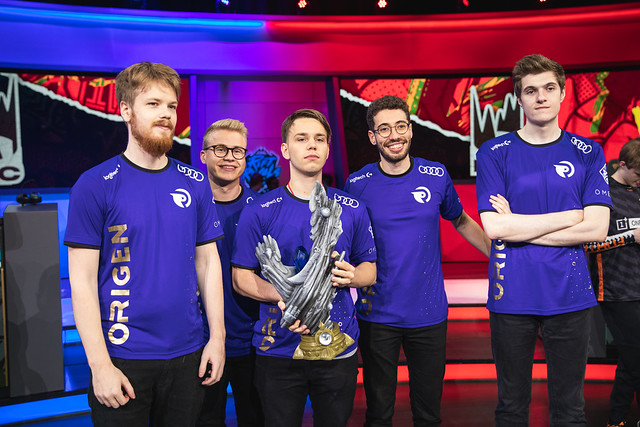 OG Patrik on NA’s reliance on Sona/Taric: “If they have good drafts around [it]they can win games, but if not then they can maybe win 1 out of 10 serious games”

Izento 2019-07-01 03:24:16
EU is officially greater than NA. With the ending of Rift Rivals, we saw Team Liquid put up a valiant effort to take the title home, but EU’s entire team lineups proved to be far too troublesome to overcome. Origen had showcased in their last match that Sona doesn’t equate to an automatic win for TSM. Esports Heaven spoke to Origen’s ADC Patrik about his first time at Rift Rivals, Origen’s play style, ADC champion pools, NA’s obsession with Sona, and which NA ADC he respects the most.

How was the Rift Rivals experience for you?

This is my first international tournament so of course the experience is nice; I enjoy Los Angeles. The tournament, I’ve wanted to play all these teams from NA and have good games but it was hard to stay serious. I didn’t even start to think about doing it for fun but everyone else was already in the process of playing for fun so I just joined in. Then it was hard to keep serious, but other than that, this has been a nice tournament.

Your team is known for being a little more traditional in play style compared to some other EU teams. This is also the style of NA of playing slower and playing more towards mid/late game. Do you think this is the correct way to play the game?

I don’t think there’s such a thing as a correct play style. I think there’s just something that works for you and your team. If G2 want to play a different style and that works for them then that’s fine. If in NA they play slow and it works, then that’s fine as well. I don’t think one is better than the other, it just depends on which team is just better.

Do you think being an ADC player, that the players in this role are limiting the amount of champions they’re willing to play? This is of course in reference to Perkz in how he’s very flexible in playing mid lane champions. Do you think ADC players are limited in expanding their ideas of what champions they can actually play?

I think it’s the players not the role because there are several picks you can play bot. So I think it’s just mostly up to players to run into it and try to learn some new shit that’s good. It’s also hard for them because ADC has been the same for over 8 years and now when there’s one new champion that’s absolutely different from every other ADC, it’s hard to go and try to just learn it. I understand it, but I think it’s mostly just the players.

What’s your opinion of Sona/Taric?

I think if you draft well around it, the pick is unbelievably broken. If the Sona/Taric is good, they don’t even get punished that hard and then they outscale hard so I think it’s just a stupid thing. There’s no reason for it to be in the game in my opinion. It doesn’t even fit the meta.

We saw Sona picked and banned quite a bit for NA teams. Do you think NA has an over-reliance on Sona?

Maybe they had a small reliance and thought that it’s the only way they can win or something. I haven’t been watching too much NA personally so I’m not sure how much they play it. I think if they have good drafts around Sona/Taric they can win games, but if not then they can maybe win 1 out of 10 serious games.

Who is your most respected NA ADC and why?

For sure Doublelift. Talking about NA ADCs, he’s the only one that’s actually good. I think the rest are not very good. I just respect that he has been on the top for so many years, it’s something I would like to achieve myself to be on top for like six or seven years. ___ Izento has been a writer for the LoL scene since Season 7, and has been playing the game since Season 1. Follow him on Twitter at @ggIzento for more League content. Images courtesy of LoL Esports For more LoL content, check out our LoL section