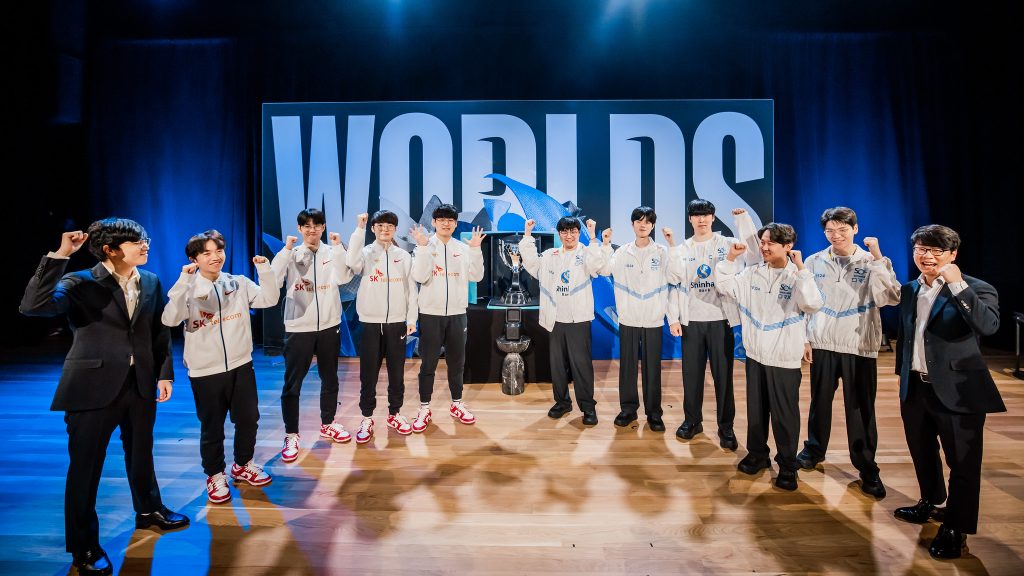 Worlds 2022 Final DRX vs T1: A Quick Guide to The Narratives and Storylines

Izento 2022-11-05 05:39:17
With League of Legends Worlds 2022 finals being upon us, there are quite a lot of important narratives and storylines to keep note of. This will catch you up to speed on what lies in the background as the players battle on Summoner’s Rift and what to look out for when either team, DRX and T1, experiences victory or defeat. 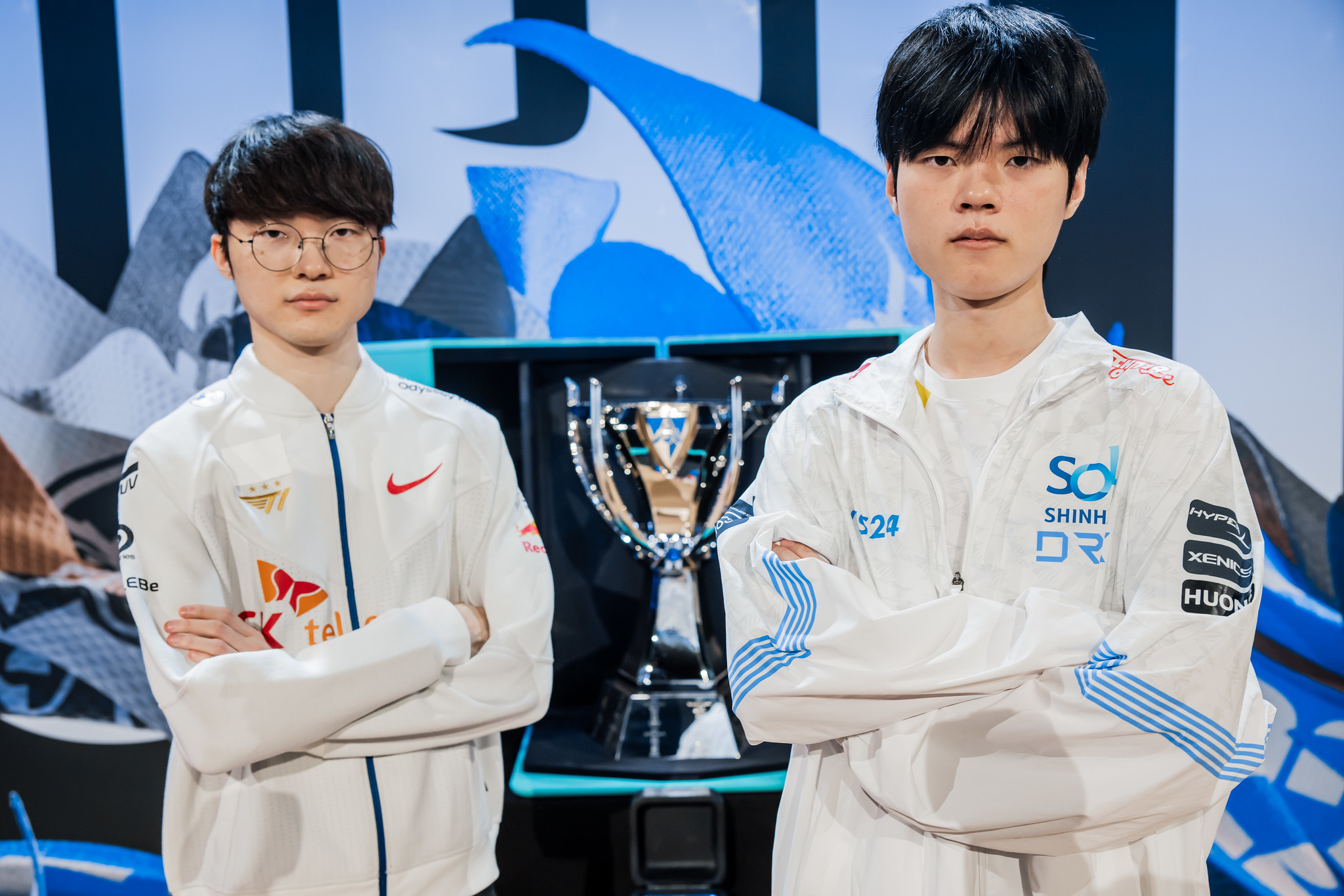 By far the most important storyline and by many it’s considered the main storyline of this final’s match, Deft from team DRX and Faker from T1 face off against each other to see who is crowned a world champion. This will be Deft’s first world championship if he wins, after coming so close in 2014 on his old team Samsung Blue, as he got knocked out of Worlds 2014 against his sister team Samsung White. This was during an era where the LCK (League of Legends Champions Korea) allowed organizations to have multiple teams in the league. Samsung Blue and Samsung White were headed into Worlds 2014 as two of the strongest teams in the world. Eventually, Samsung White would win the world championship and Deft would not place higher than semifinals until now. This shows that Deft has the pedigree of a top competitor, and the longevity to even rival the likes of the legendary Faker. Also, with the term “last dance” being thrown around about Deft’s career, as his mandatory military service in South Korea is coming up (South Korea requires men to enter military service by their 28th birthday), many are rooting for Deft to go out with a bang and win a world championship. Everyone knows who Faker is, but to give context for those not familiar with esports, he is a 3 time world champion, winning in 2013, 2015, and 2016. Now he’s set to collect his fourth championship title, and in the face of his long time opponent Deft. The reason why this is significant is because not only have both of these players been at the top of their positions for years, but they even attended the same high school and debuted during the same year in the LCK; Mapo High School surely will come out as a champion no matter the outcome. If Faker does win another title, it will only add to the idea that no one, not even future LoL pro players, may ever come close to matching his accomplishment of 4 world championships. 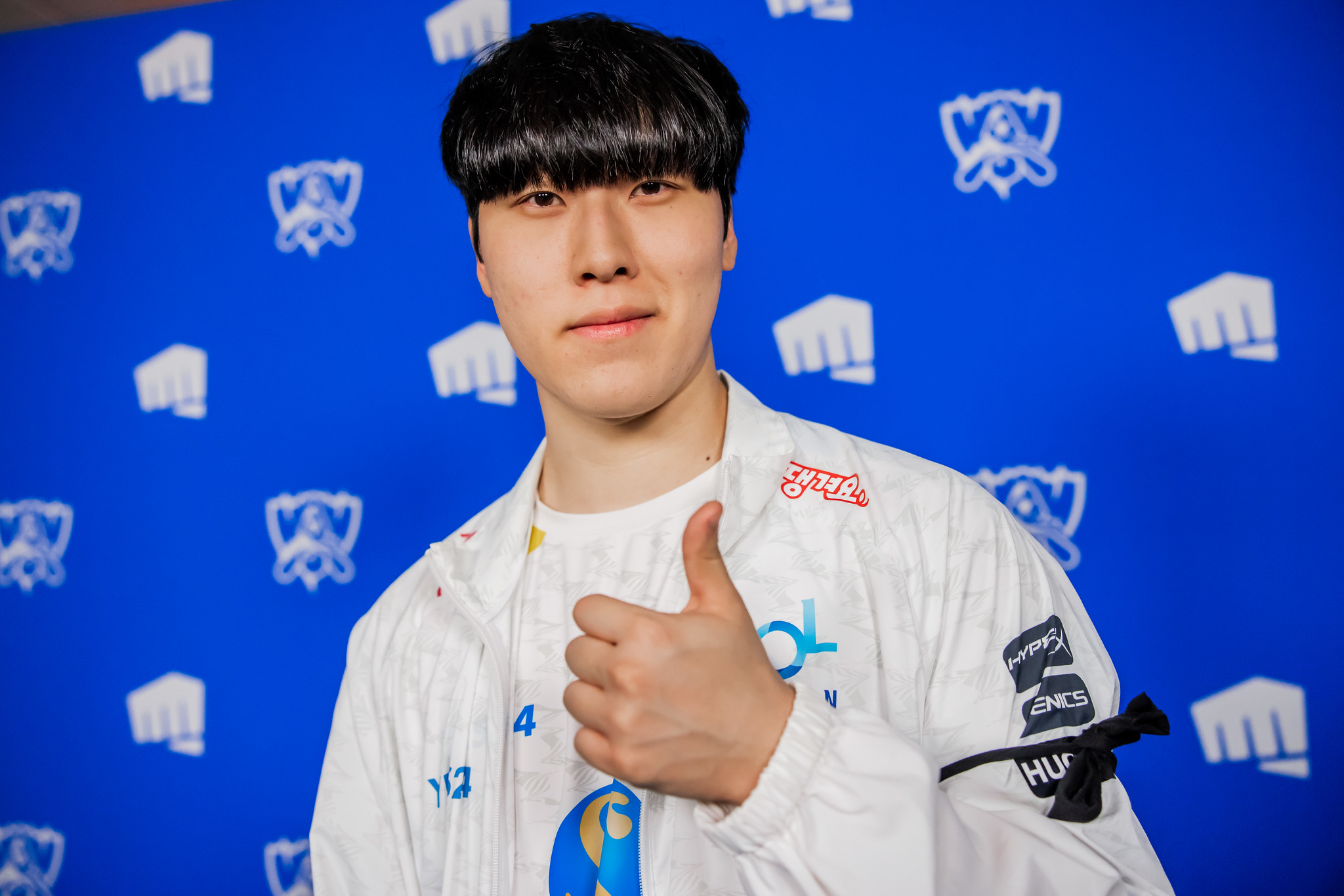 Zeka from team DRX entered into the Worlds 2022 tournament with low expectations from almost every professional analyst. After having a mild showing in his regional tournament circuit, Zeka and team DRX were not even expected to make it to the quarterfinals of Worlds 2022. The unassuming mid laner would put on a masterclass at this tournament, solo killing famous EDG mid laner Scout four times in a single game, and would also beat, what many analysts consider the strongest mid laner of the tournament, Gen.G Chovy, in an unexpected four game series. The main criticism of Zeka has been his limited champion pool, as he has shown proficiency on Akali, Azir, and Sylas, which given the added context that Faker has played over 50 champions across the span of a decade, one immediately sees the problem heading into this finals match. Be on the lookout for this part of the narrative of if Zeka can shore up this perceived weakness against the almighty Faker. 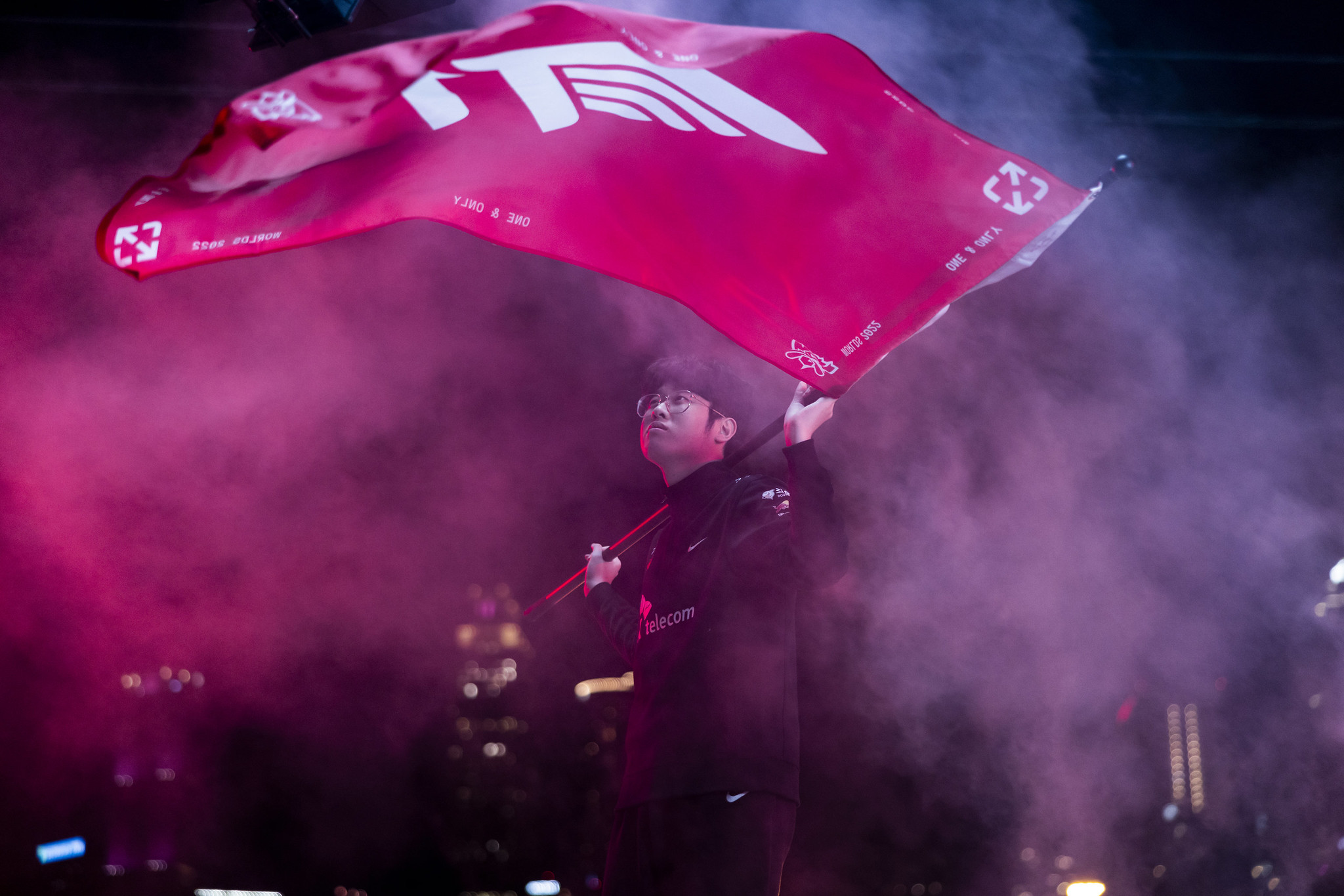 Zeus and The Beginning of a Legacy

T1’s top laner Zeus has put on a stellar performance during Worlds 2022. From his feared Yone pick, to his masterful comeback on Jayce, many analysts have granted Zeus the title of best performing top laner in the tournament. Heading into Worlds 2022, he was considered to be one of the best players on the T1 lineup, and so far it’s showing. He’s been able to outclass his competition by getting solo kills and drawing pressure towards his part of the map without the help of his teammates. Be cognizant of Zeus’ story as we head into the finals match and whether he can cement his legacy and truly be considered one of the best top laners in the history of League of Legends. 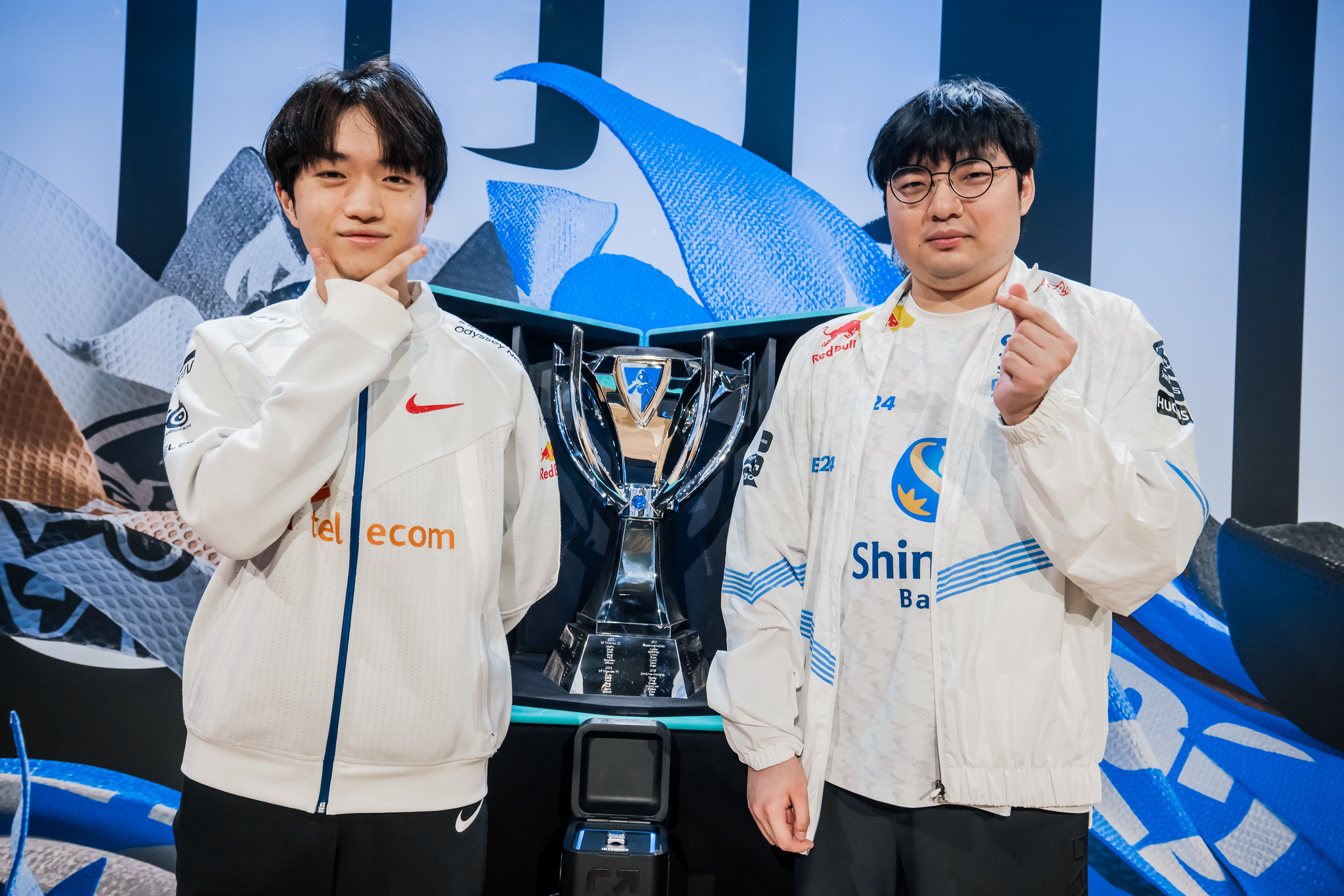 Gumayusi and Keria vs Deft and BeryL

T1’s bot lane consists of the young duo Gumayusi and Keria. Both players have been heralded as the best bot lane in the world at some point this year, but Gumayusi in particular has received criticism for his missteps in the ADC role, after having unnecessary deaths during the end of Summer 2022 LCK and at the beginning of Worlds 2022 Group Stage. Keep track of if Gumayusi can continue to shake off his demons and show consistency in his gameplay. Deft and BeryL look to try and beat the rising T1 bot lane, as Deft has previously shown in the tournament that he is one of the shining beacons of hope for DRX to win games. BeryL in particular has also been looking better as the tournament has progressed, and with being the only world champion on the DRX lineup, previously with Damwon Gaming Kia, he wants to claim another title. Keria, the support player for T1, is said to be the best support player in the entire tournament. Boasting ridiculous plays to help out his teammates and all while being 20 years of age, many onlookers are expecting Keria to continue having success as his career shapes out. Having been a previous teammate of DRX bot laner Deft, both players have pride on the lane as they face off against each other in their finals match. Both should experience feelings of heartbreak and elation, so look for the narrative of nervousness and brotherly rivalry.

DRX are making it to the Worlds 2022 final as being one of the least likely teams to make it this far. This appearance is so shocking that Riot Game’s Pick ‘Em predictions tournament shows that not a single fan predicted DRX to make it from beginning to end of Worlds 2022. Fans and analysts alike are calling this a “Cinderella Story”, as it would be fitting that against all odds, DRX win the championship, their mid laner Zeka gets recognition as a world class player, Deft is finally crowned a champion after 9 long years, and BeryL claims his second championship. Alongside this, their coach Ssong is looking to get revenge, as previously he coached the legendary team ROX Tigers in 2016, where they failed to beat T1 (previously known as SKT) in what is thought of as the greatest series of all-time. Additionally, their general manager Ccarter used to be head coach of T1, winning them all 3 of their championships, so the question now is, can he win another one all by himself? T1 are all about dominance. After a great showing in LCK Spring 2022, winning their domestic championship, to then losing against the Chinese LPL (Leauge of Legends Pro League) champions RNG (Royal Never Giveup) at MSI (Mid-Season Invitational) in the finals, T1 look to bounce back and prove that they are the best team in the world. This will be the 4th championship for both T1 as an organization, and Faker as a player. In the background, lurks their head coach Bengi, previously the famous jungler of T1 that helped Faker get his 3 rings, and he’s looking to get one as a coach. Bengi will be the first person in the history of LoL to win both as a player and coach if he’s able to grab a victory tonight. The storylines of this Worlds 2022 finals are bursting with emotions and pride as DRX and T1 look to fight for their own slot in the halls of LoL history. No matter the outcome, this finals match will certainly be an entertaining one. Izento has been a writer for the LoL scene since Season 7, and has been playing the game since Season 1. Follow him on Twitter at @ggIzento for more League content. Images from Riot Games For more LoL content, check out our LoL section