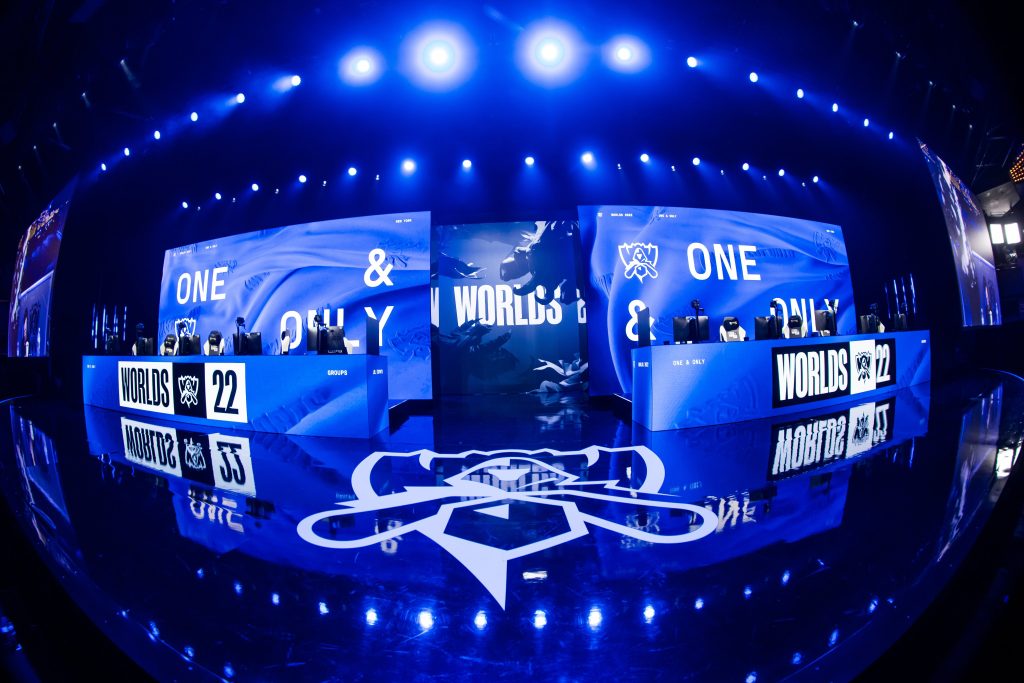 Mush 2022-10-12 03:23:00
Worlds 2022, the “One and Only”, as Riot is calling it. The most prestigious event for the biggest esport in the World and, sadly, one of the most plagued by technical issues. This tournament is the culmination of everything that happened throughout the year, and it seems that the tech pauses that were present in pretty much every region — let’s not forget the Hex Flash debacle— are being beautifully highlighted.  We are close to reaching the middle point, and it has been nothing short of a joke so far.  The games have been great to watch. The casts, analyst desks and interviews have all been good. Yet, it’s hard to focus on these positives when you try to watch the games live.

The funny thing is, not even vods are safe (unless you choose EpicSkillShot, please watch the vods there if you value your time). Let’s suppose you said “fuck it” and decided to give up trying to watch Worlds live after the first play-ins day. After all, it did take us 4 hours just to get through ISG vs MAD and FNC vs EG. Who would judge you, right? So, following the disastrous experience, you said to yourself: “I am done watching games live. I’ll just watch everything the morning after on the Lol Esports Vods and Highlights channel.” Well, since Riot loves us EU fans who try not to ruin our entire sleeping schedule by watching games till 5AM, they decided to also highlight the beautiful delays which they didn’t bother cutting from the vods.  You can check for yourself right now, but the two first play-ins vods are still up and they both last upwards of 1h and 40 mins, with nearly half of that time being the delays.  Watching League of Legends live is never a consistent experience, and that’s by design. The referee’s bell will whistle when the clock strikes the 90 min mark in a football game (Soccer), and you know that the game will not last much longer than that. An esport is different, especially a MOBA like League. Games can last from sub-20 to 40-50 min affairs. So it’s fair to assume that people will always try to allocate a bit more time than the foreseen an hour a match estimate, but it is not reasonable to have the amount of delays the play-ins did.  Thankfully, Groups Stage hasn’t suffered much from this issue, but boy is there more.

The bugs, oh, the bugs. I genuinely feel like I’m playing Grounded again when I catch up with Worlds vods. Vandiril is probably just rubbing his hands, laughing maniacally while waiting for the next one to show up.  The man himself pointed out two of the biggest bugs that have been noticed on stage:

Orianna’s bug is the most egregious of the bunch. When you Q and R right afterwards, the AOE ult animation shows around Larssen (the classic “Sombrero”), but the hitbox is actually still around the ball. This is utterly game breaking and has forced Riot to remove the champion from Worlds “until further notice”.

In RGE vs GAM game there was an Orianna ult bug. Her Ult appears to be on top of her, but she actually hits Viktor, that is away from her.

I wonder if it qualified for chronobreak (it should, unless worlds buglist [that teams get] specifically says otherwise). pic.twitter.com/9KDX3fqRfd — Vandiril (@Vandiril) October 10, 2022

Riot has announced that she is now back, so she’ll be available for the entirety of the second-round robin. As we know, though, not all bugs are this easy to fix. Let’s not forget the Hex Flash fiasco.

The second bug pointed out by Vandiril was in a minor incident in this case, but still worrisome, nonetheless. Gnar’s Q while in mini form can just change the return trajectory, seemingly at random.

In DRX vs TES game Gnar uses his Q, but thanks to the boomerang Bug it gets redirected to a completely wrong place and hits Jax. This Bug allowed DRX to eventually kill Jax and secure First Blood.

It benefits Kingen in this case, but it likely didn’t affect the outcome of the dive. What if it did, though? Gnar is being picked a lot, it is probably just a matter of time until a game-deciding play is affected by this reproducible bug.

The third example is the birdman himself, the most picked mid-laner in Group Stage. The champion is so strong right now and his supremacy as Emperor of Shurima is so powerful that he ults whenever he feels like, regardless of any Crowd Control effects on him.  The play happens at 20:37 in this video. In this example, Knight, likely spamming his R button in pure panic, manages to use Azir’s ultimate through Rakan W+Ult and Lee Sin’s Dragon Rage. If you watch closely, you’ll see that Trymbi flawlessly chains his CC by knocking Knight up before the “Charmed” CC bar reaches zero, but Azir’s ult gets buffered either way. This bug had an impact on the game. Knight was worth 450g, with the 150g bounty. That is a pretty considerable sum, especially for someone like Larssen as a scaling control mage. It also influenced the minute afterwards, because Rogue invested three crucial ultimates for what should’ve been a sure pick on the enemy mid laner, but got nothing in return. This lack of cooldowns essentially gave TES the second Herald for free, all on the back of a bug.

Last, but certainly not least, G2’s Brokenblade decided to bring Darius into Worlds just to showcase yet another bug. In their game against JDG, Brokenblade ults Yagao who dies before the damage goes through.

Anyone knows why Darius ult went on CD in-game? Lolwiki says it shouldn’t because target died while casting https://t.co/kLCYkPDbMO

According to Lolwiki, the ult should not go on cooldown when this happens. “If the target becomes untargetable, dies, or is too far away or no longer in sight during the cast time, this ability will cancel but does not go on cooldown nor pay its cost (if applicable).“  As LEC Video Producer Shakarez pointed out on the first comment, the spectator overlay is wrong, and Darius ult really goes on CD. Maybe the tide of the fight wouldn’t have changed, but it honestly might’ve. Darius can reach numbers like 1000 true damage at max rank with the passive fully stacked. So, when Brokenblade runs into 369 and Kanavi, most likely believing he still had his ult, he stacks his passive on the Renekton and has what would be a window to ult him. At this moment, Renekton is slightly below half-hp and might’ve actually died. If he did die, Darius would’ve healed for 8% of the true damage dealt due to his Conqueror and his next auto or ability on a champion would’ve instantly fully-stacked his passive. 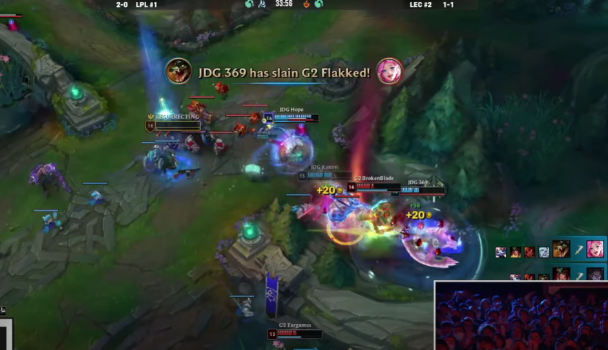 Granted, JDG still had Hope as a full-hp Sivir with Yuumi on her, but BB also had a Stopwatch in his pocket. How differently could the fight have played? What if this had been the 5th game of the Finals?

So, what should be done now? Is Riot going to disable the 4 champions that we know have possible game-breaking bugs? Orianna was already gone, are we going to lose Gnar and the most played mid laner in the tournament too?  Let’s say we do lose them, and Riot manages to dive into the spaghetti, change the sauce a bit and miraculously bring them back as fast as they did Orianna. Even if they manage to pull this off, the groups might still be decided under unforeseen circumstances with pick/ban constraints that should not have been there. Remember, most of the Groups are extremely close right now.  This is frankly unacceptable for any League of Legends event, let alone Worlds, “the one and only”. League is deeply and irreversibly broken. The spaghetti code memes were funny for a while, but 10 years later it is just sad.  A little over 5 years ago people hoped that the client update would bring a little more stability to the game. Soon after, a lot of those people just wanted things back the way they were. New problems showed up left and right, and still do to this day.  There doesn’t seem to be a patch that doesn’t break anything. It has been feeling more like a swiss cheese than a plate of spaghetti now. You plug a hole and the water just comes out in a different one that you didn’t know even existed.

The growing sentiment seems to be a different one now: just burn it to the ground and start anew. The more blocks you put into this already crumbling base, the more unstable the whole thing becomes. Forget Overwatch 2, Source 2 or Half Life 3. What we need, urgently, is a new League of Legends. More importantly, though, we need a Riot Games that actually treats Worlds as the most prestigious competition under their umbrella. No more interviews with players claiming that the light is so bright they can’t see their monitor. No more PCs with performance issues both on stage and in practice.  If you’re going to call Worlds your “One and Only”, fix the problems. Otherwise, it will just be “Another disappointing one”. Images courtesy of Lolesports . If you enjoyed this piece, follow the author on Twitter at @mushwrites. For more League of Legends content, visit our League of Legends hub.