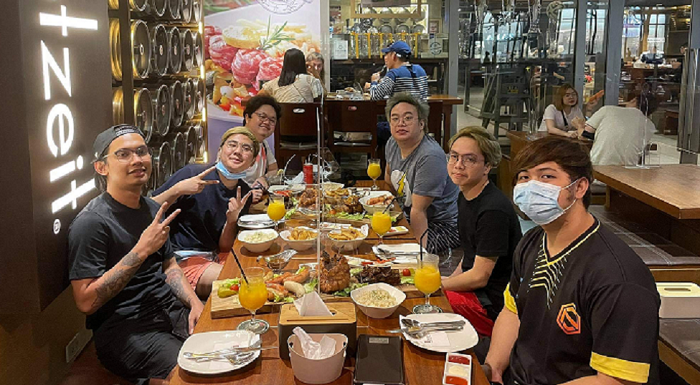 Izento 2021-03-12 10:41:58
Neon Esports Manager, Karl-Angelo sat down with Esports Heaven for a quick chat regarding his team's performance in the SEA Regional DPC League, their preparation for the upcoming Singapore Major, his thoughts about his team's synergy and more.

Hello Karl. Thanks for taking out time for this interview. How are y’all doing considering Neon Esports has qualified for the Singapore Major? Everyone must be in high spirits and motivated. Thank you for having me. Yes, we’re excited to play on an international stage. We’ve been longing to play against the top tier teams and we’re very motivated to prove something to the world.   Let’s talk about the team for a while. How was it fielding a team plagued with constant roster changes in the past one year, and then finding the much needed stability just in time before the regional DPC leagues began? It’s relieving. To have a stable team that can compete at a high level, you cannot really ask for more than that.   While many gaming orgs, most primarily NA and EU, have either dropped or renegotiated contracts with their team rosters, Neon Esports has managed to provide a roof over the player’s heads. Hasn’t Covid affected the activities of the org? It didn’t really affect the operations of the org. We continued participating in tournaments, all of which were online. We remained active in the scene as we had high hopes that the DPC would resume and we wanted our players to be in top condition for when that happened.   Would you attribute that to the lower cost of living/salaries in SEA region or the org taking a balanced approach in regards to contracts, etc.? It’s about the org taking a balanced approach in contracts.   Nonetheless, Neon Esports has been impressive in the regional DPC league and rightfully so qualified for the Singapore Major. As a manager, how does this roster compliment each other individually from your point of view? One is that they really like playing with each other. They trust and respect each other that they’ll be able to do their roles. I think that’s just the foundation of a team. Trust and respect   How would you rate the squad’s performance in the league in consideration with the losses accumulated against Fnatic and T1? Has the team discussed where to focus or improve in order to put up a respectable fight at the Major against the best teams in the world? I think it went well, which is how we expected it to go. Before the start of the season we were determined to get a spot in the Major and we weren’t aiming for the wild card. We wanted to be in the groups or playoffs, so our expectations were spot on. After the losses against Fnatic and T1 we began to feel a bit of pressure, every series we lost we had lengthy discussions on why we lost and how we can improve. We just wanted to set our plans and focused on taking it one game at a time and made sure every player was in on it.   Also read: FaZe Clipz on the genesis of FaZe Clan - A Happy Accident   How would you rate SEA at the upcoming Major as compared to the heavyweights in Europe, China and North America? Does SEA (including Neon) have a chance to surprise or land a top 3 finish at the Major, or do you think it’ll be a struggle to get into top 8? I think SEA is in the middle of the pack. I mean every player and team is skilled across all regions, the only difference maybe is the additional intel from a coach, or conditioning of a player, or whatever extra effort they put in. For SEA, I think we have a chance to make it to top 8 and top 3 may be hard. But we’ll never know until we try.   Considering Neon or SEA teams perform well at the Major, would you attribute that success to the time-zone/region travel? After all, SEA teams will have less tough time dealing with the jetlag, quarantine, practice or getting used to the time-zone. It may be one of the factors to consider. Of course the process of the tournament right now is a bit ridiculous, especially for the other regions far from SEA. But I’m sure the management of the teams are doing their best to make sure their players perform at their highest level when the tournament comes.   Can you shed some light on how the team is preparing for the Major? Any team exercises or other activities that’s been instrumental in dealing or improving the team synergy? We’re just continuing on playing scrims, experimenting on heroes and line ups. Eating healthy and getting enough sleep. Physical exercises are impossible right now as the gyms are closed and having a jog is a bit risky because the players might get infected. Literally EAT, SLEEP, DOTA is the routine.   On a scale of 1 to 10, how confident are you on Neon getting a top 5 finish at the Major? I’d say a 5. Though only 2 of our players have previously competed in a tier 1 tournament, I’m still optimistic that we can make it top 5. We just need to keep our spirits high.   How are the travel arrangements coming along to go to Singapore due to the Covid pandemic? Has it been a smooth journey so far? Yea, PGL has pretty much arranged most of the process for us.   Alright mate, that’s it for now. Anything you’d like to say before we wrap this up? I’d like to thank you again for having me and thank all the fans of Neon. We hope you support us in our journey in our first DPC Major. If you enjoy reading my work, follow me for more content at @Karyb4u.  Kindly support us by following Esports Heaven on Twitter and keep tabs on our website for more interesting content. Feature Image Credits: Karl-Angelo Twitter